The Feverish Effects of a SOHO Spring 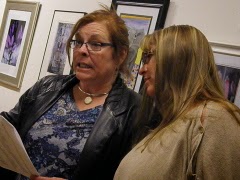 One a day indicative of the exhibition’s title, The SOHO in the BURG in Stroudsburg, PA held an Artists’ Reception for their “Spring Fever” show on Saturday April 5th. The exhibit featured work created by a multitude of local artists and photographers with nearly 150 pieces lining the gallery’s walls. The array of colors gave the impression one was walking through a blossoming field with vividly imagined fragrances filling the senses with their delights which the large number of art lovers who entered the gallery were visibly enhanced by.

Yet, while there were a significant number of images reflecting the bright hues many associate with the hope and vibrancy of the Spring season, there were also a number of images depicting a darker mood that lent a striking contrast to the majority of the work. The inclusion of these pieces reminded those who ventured upon them that the seasons one encounter throughout life isn’t just metrological demarcations of warmth and chilliness but a significant cycle upon which all life evolves. And, all life, if it is to be of any meaning, has a certain balance containing elements of both the light and the darkness in which we encounter as we experience our lives on a day to day and/or moment to moment basis. Including these reminders allowed for a certain degree of reflection to take place among the attendees which enhanced the intellectual dimension of the exhibit to a level a lesser gallery would not venture to consider.

Along with the inspiring art The SOHO in the BURG is known for, the gallery is also famous for the culinary delights it presents during its Artists’ Receptions which are created by Chef G (aka Guarino Cortese). However, Chef G had another engagement that evening so his wife prepared a number of delightful snacks which satisfied the palate to great effect. You can learn more about Chef G and his catering services by contacting him at chefIIgo@yahoo.com.

The music for the evening was provided by a DJ known as D. J. Will Power. A variety of tunes were played throughout the event that created a series of moods ranging from those conducive to quiet conversations to those inducing librational dancing. In either case, the music enhanced the gathering as the plethora of sounds flowed through the gallery making it all the more enjoyable.

Although I did not stay for the entirety of the Artists’ Reception as there were other adventures to be had that evening, the time I did spend there more than indicate the remainder of the event would prove to be a stellar one as all previous receptions had been since the gallery opened its doors two years ago. It was a grand time and I hope there will be others reading this article who will share their experiences by adding a comment or two in association with their memories. You’ll find more photographs taken during the Saturday April 4th Artists’ Reception for The SOHO in the BURG Gallery’s Spring Fever exhibition in The Stroudsburg Art District 2014 Gallery at www.facebook.com/media/set/?set=a.10152239353790421.1073741877.636000420&type=1.

The SOHO in the BURG Gallery is located on the corner of 6th and Main Street in Stroudsburg, PA which was the location of the J. J. Newberry’s store. The gallery opened its doors to the public in April of 2012 and is owned by Andrea Robbins Rimberg who has become well known for her exuberant energies and creativity as many of her pieces are on display in prestigious galleries throughout the United States. The “Spring Fever” exhibit will continue to be on display until the middle to the later part of May. The next exhibition titled, “Sailing into Summer” will be presented at the Gallery soon afterwards. You can learn more about The SOHO in the BURG Gallery, their future exhibits, and all the gallery has to offer the creative community by exploring their Facebook Page at www.facebook.com/sohointheburg.
Posted by Unknown at 7:37 PM