A Nice Day for an Open Mic 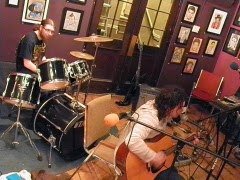 The Sherman Theater’s Living Room in Stroudsburg, PA held another installment of weekly Open Mic Nite Series on Sunday April 6th. The early evening sunlight streamed through the windows and glass door of the venue reflecting their beams upon the art work that remained hung upon the wall from the current exhibition which opened the previous night. Dave Pugh and co host Andrew Oldfield shared a precursory jam session with Dave on electric guitar and Daniel on drums. They were joined by Brad McCool on vocals although his microphone wasn’t turned on as yet. It was during these moments did those who ventured into the Living Room take their place in line awaiting the time when to sign their names so they could share their talents. It did and the list, in its usual fashion, filled up quickly.

Since the weather was sparkling nice, many sought to venture outdoors to explore the town and to soak up the rays of warm sunlight prior to the open mic sessions beginning. However, many found the lure of the atmospheric conditions too mesmerizing to keep track of time leading many to return to the venue quite some time after the performances began. Still, their arrival proved to be a welcomed sight for those who were performing and the melodies that greeted those who re entered the venue made their return a delightful one.

The evening began with some welcoming remarks shared by co host Jessie Roth (aka JR) who allowed a poem to be read by her heart. She then introduced the first performer whose name was on the sign in list which was Justin O’Neil Rosario who will be among those performing during the upcoming Open Mic All Stars Show scheduled to take place on Friday April 25th at The Living Room. His performance proved to be a lively beginning to the evening’s festivities as the power of his voice and guitar combined to energize the audience who flowed back into the space as well as those who were present when he began.

Co host AP (aka Andrew Paul) came to the stage when Justin had completed his set to introduce Brad McCool to the stage. Brad sang a song while listing to its music through his MP 3 Player’s Ear phones which encouraged everyone to listen more intently to the lyrics as the distraction of music was absent. Brad was followed by Dave Pugh on electric guitar and co host Andrew Oldfield on drums as they expanded the Jam session they shared earlier and enhanced it with a few songs that pleased to crowd. It was announced as the performance was coming to its conclusion that Dave will be the following week’s featured performer which inspired a great deal of anticipation among those who enjoy the Open Mics all the better when a musical guest is offered to entertain the gathering during the night.

As Dave and Andrew ended their set, Vinnie took the stage with his guitar. Vinnie had become a favorite among those who frequent the event but he had been absent for quite a number of months from it. His return was a welcomed one with several commenting on how his performance allowed them to realize how much they missed him. The power and emotion transmitted through his voice accentuated those very same essential elements of the songs he presented until they were more felt than heard.

After Vinnie concluded his set, Co host AP returned to the stage to perform as AP Box www.facebook.com/APbboxes4u and began utilizing a series of vocal effects to convey various concepts to the imagination of his listeners. It was during this time a challenge arose form the audience by a man named “David” who sought to outdo the audio extravaganzas of the event’s co host. A series of soundtracks coursed their way along the sound waves scurrying in and out the ears of those who were present. It was a heated competition but, in the end a vote was taken and the challenger had deservedly prevailed.

After the battle of the boxes were over, C-Rock 113 took the stage with his electric guitar and began sharing a number of songs with the audience. The power of his performance emancipated the room as its inhabitants found themselves freely flowing along with the ethereal chord changes and melodies that eluded from his instrument. It was towards the conclusion of his set that a reminder was shared that C-Rock 113 would be among those who were scheduled to perform during upcoming Open Mic All Stars Show on Friday April 25th.

C-Rock 113 was followed by Kes who had most recently performed during the previous evening’s artists’ reception held at The Living Room. His performance touched the smiles of his listeners as the songs he sang sparkled with meaningful contemplations and thoughtful entertainments. A break ensued after Kes’ performance which allowed many to chat about the experiences they had throughout the evening.

The conversations came to a close as co host Jessie Roth (aka JR) took to the stage to share some words written by Brad McCool. The beauty and thoughtfulness that shrouded them in her delivery of the work brought a new understanding and appreciation of their author. The reading reminded many that the imperfections embodied in our sometimes inadequate expressions of what we conceive as love fades away when we are touched by the radiance of pure and perfect light of love itself.

Jessie was followed to the stage by Max who shared several of his poems with one that particularly standing out which was an Acrostic Poem which is a poem whose first letters of its lines spell out words. One of the most noteworthy examples of this approach to poetic expression is the poem titled, “A Boat, Beneath a Sunny Sky” written by Lewis Carol which appears in the final chapter of “Through the Looking-Glass, and What Alice Found There.” The first letters of the words in each line spells out the name “Alice Pleasance Liddell” who is the Alice featured in the book as well as Mr. Carol’s previous work titled, “Alice’s Adventures in Wonderland.” In Max’s well composed piece, the words spelled out “Gamer Edge,” “The Living Room,” and “Ashley.”  Very cool.

Woodrow www.facebook.com/wearewoodrow, consisting of Theresa Ratliff on vocals and Brian Bramkamp on vocals and guitar, took the stage as Max completed his recitations. They rocked the house in their usual fashion as their songs mingled with memories from an echoed past while inspiring new ones to emerge from the experiences their performance created. They were followed by Sick Antelope Party www.facebook.com/sickantelopeparty who consisted of Amy Burawski, Vid Ryan, and Jesse Morales.

Together their performance artistry soulfully combined spoken word poetry and instrumental renderings in order to enhance the substantive nature of the conveyances the trio shared and whose esoteric utterances transcended the ordinary communicative abilities of those who fall short of the angels. None who heard the poets or the instrument’s voices were unmoved by the experience they created. In the wake of their time within our hearts, a reminder was shared that Sick Antelope Party would be part of the upcoming Open Mic All Stars Show on Friday April 25th.

Sick Antelope Party was followed by a theatrical production presented by Da Da Dum Theater titled, “Hammered Art” written by Paul Adam Smeltz (yeah, that’s me). It was performed by Amy Burawski of Sick Antelope Party and co host AP (aka Andrew Paul). The piece was about the proper use of a Hammer Four and receive a few chuckles. A Da Da Dum drum beat was played by co host Andrew Oldfield that signaled the end of the performance.

The evening came to a conclusion with a performance given by Wilbium who played a number of familiar dance tunes upon his computerized keyboard. One such song was titled, “Dancing with Myself” written by Billy Idol and Tony James in 1981. It first appeared on the Generation X’s final album titled, “Kiss Me Deadly” which was a punk band both Idol and James were members of. A toned down version was released later by Billy Idol later that year on an EP. Many found themselves moving along to the beat but it was Brad McCool who took it upon himself to follow the dictates of the song and the evening ended with the joy of watching him Dancing with Himself. You’ll be able to find more photographs taken during the Sunday April 6th Open Mic Nite Session in The Living Room 2014 Gallery Part 3 at www.facebook.com/media/set/?set=a.10152343904050421.1073741890.636000420&type=1.

The next installment of the Living Room Open Mic Nite Series will take place on Sunday April 13th beginning at 7pm with sign ins beginning at 6:30pm. Special musical guest will be Electric Guitarist Dave Pugh. Musicians, poets, writers, and anyone who would like to share something with a receptive audience are welcomed to do so. An Open Mic All Star Show will take place at The Living Room on Friday April 25th beginning at 6pm. It will feature Theomar Chakey Francois (aka Sunny Shading) along with the musicians and performance artists mentioned earlier in this article. You can learn more about The Living Room Open Mic Nite Series and the All Star show by Exploring their Facebook Page at www.facebook.com/OpenMicAtTheLivingRoom.

In addition to the Open Mic Nites presented at The Living Room, the venue also holds a Gallery which presents the work of visual artists from around the area. Their current exhibition features the work of Leonard Boone www.facebook.com/pages/Boones-ART-Boulevard/167124073498891, Ashley Fontones www.isashleyfontonesapotato.com, Eric Goins, and Ben Schwartz www.facebook.com/BenSchwartzArt. The following exhibit will be their a group show in May titled, “Art-ology.” Please contact the gallery’s Director and Curators, Keyaira and Drew Ozkenel, at 570-421-2808.

The Living Room is located on Main Street in Stroudsburg, PA next to The Sherman Theater who owns the building. The Living Room is a non-profit artspace and community hub featuring live music, performance, and other events in an intimate setting at affordable prices. Please Explore The Living Room Facebook Page at www.facebook.com/pages/The-Living-Room/123978921059378 for more information on The Living Room, all they have to offer, and how to be a part of it all.
Posted by Unknown at 7:44 PM