Passions and Hope in Song 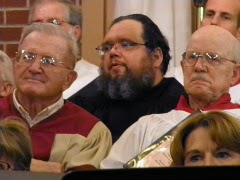 The Pocono Mountain Community Chorus of Churches presented their 35th Annual Holy Week Concert Series in three performances which were held at The Faith Lutheran Church in Blakeslee, PA on Sunday April 13th, The Tobyhanna United Methodist Church in Tobyhanna, PA on Tuesday April 15th, and The Reeders United Methodist Church in Reeders, PA on Wednesday April 16th. The choir consisted of members of churches established in the Monroe County, PA and surrounding areas (including New Jersey) varying from Roman Catholicism to Unitarian Universalist. Together, they joined to honor a week in which many of those practicing the Christian religion consider to be of paramount importance to their faith.

The Choir was led by Jack Hamblin who was accompanied by Gary Raish on Organ, Judy Munoz on Piano, and Bob Riday who performed on flute during the series’ prelude and the piece titled, “Beneath the Cross of Jesus.” Additional musicians performed during the selection titled, “Come, Ye Sinners, Poor and Needy” with William Gross on Percussion and Joan Loveless on Finger Cymbals during Sunday’s concert while Emma Hendricks lent her talents to the instrument during the remaining performances. In addition to this, members of the Bass and Tenor section of the choir presented the song titled, “Ain’-A That Good News” in a joyous bravado style.

The musical qualities of the large choir made the entire series of concerts an enjoyable experience especially to those who embrace the Christian faith and find an inner peace when the melodies and lyrics shared by the wonderful blend of voices were delivered to them through their marvelous talents. The flow of musical selections encircled the hearts and souls of those who inhabited the sanctuaries they were sung bringing each listener enough of a sense of solace so the community of worshipers could free themselves from the bounds of their individual dreads and fully embrace the essential elements of a number of songs which encouraged a celebration of life. The passions and hopes presented throughout the performances elevated the community of believers who were touched by their song leaving them able to face their lives with new perspectives regardless of the freakish snow storms they may encounter throughout their days. You’ll find more photographs taken during the concert series as well as one of the rehearsal sessions in The Special Events 2014 Gallery at www.facebook.com/media/set/?set=a.10151513384020421.546231.636000420&type=1.

To many who live in the United States and particularly those residing in the Northeast PA region of the country, the week corresponding with the Hebrew Holiday of Passover contains events in which an individual known as, “Joshua, son of Joseph” (aka Jesus The Messiah or Christ) partook of toward the end of his life in c. 33 C. E. (Common Era). These include holidays known as Palm Sunday in which he reportedly rode upon a donkey into the city of Jerusalem located in the Roman province of  Judea, Maundy Thursday in which he held his final meal celebrating the Passover holiday with his disciples, Good Friday upon which he was executed by crucifixion after being found guilty for sedition, and Easter Sunday in which some claim he was reanimated (resurrected) after his death and resumed his role as a leader to his disciples until his “ascension into the Heavens” echoing an act believed to had been performed by the Hebrew profit Elijah several centuries earlier.

The Pocono Mountain Community Chorus of Churches hold a series of concerts annually in commemoration of Holy week and the events which took place during it. Members of the community are invited to lend their voices and participate in their 36th annual concert series with rehearsals beginning early in 2015. Membership in the choir is free and open to all singers who enjoy sacred music associated with the Christian faith regardless of their level of musical experience. To learn more about this year’s series, how to participate in next year’s series, or The Pocono Mountain Community Chorus of Churches in general, please Contact its director, Jack Hamblin, at theauctioneer@jackhamblinauctions.com for more information.
Posted by Unknown at 10:53 AM