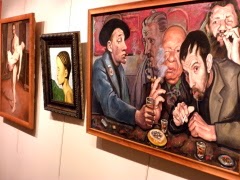 The PoconoArts Community Cultural Center in Stroudsburg, PA held an Artist’s Reception on Friday April 4th for their exhibition in their ArtSpace Gallery featuring the works of Bill Gothard. The gallery filled to near capacity as friends, family, and art lovers who were fortunate enough to learn of the event moved from one painting to another to experience the beauty of the exhibit. The awe inspiring details encased in each piece liberated the imagination of the viewer as its descriptive qualities transcended the boundaries of the frame inviting those who wish to be part of the world it created to partake of its environs.

The living qualities of each piece beckoned the viewer to explore it deeply so it could relay its life story. Our eyes were able to hear the biographies of these denizens of the canvas through the language of color and composition that molded their existence. Their sharings touched us as one amazing tale followed another until their stories became part of our own. This aesthetic connection permeated the room as conversations were elevated by the revelations the images revealed through their stunning visual properties.

William “Bill” Gothard was born in Brooklyn, NY in 1932 and discovered art at a young age. His love for art and the images he could create on canvas inspired him to become an accomplished realist-expressionist who is best known for his portraits in which he captures the immediate feelings of his subjects. Mr. Gothard is the recipient of the Flushing High School’s Saint-Gaudens Medal for Fine Draftsmanship and earned a New York City School Art League Scholarship to The School for Art Studies. Mr. Gothard is a former director of MCS Gallery in Easton, PA and currently resides in Sciota, PA.

Mr. Gothard’s work at The PoconoArts Community Cultural Center in Stroudsburg, PA is truly an extraordinary display of beauty, detail, and the humanity that enables the individual viewer and the piece to share in the creative experience of living together. The exhibition will continue to be on display in the center’s Artspace Gallery until April 30th. It is sponsored by R. Ronald and Patricia Bitondo, Donald O. Bodden, Barbara and David DeAngelo, John Marchiando, Richard Saldamando, Mildred Sherman, Colin and Kathleen Snyder, and Ted and Ingrid Wetherbee. The Pocono Arts Council has expressed its appreciation to the artist, Rich Staneski, and Andy Worthington for their inspiration, encouragement, and endeavors in presenting the exhibit in its Artspace Gallery.

The next exhibits to be presented in the Center’s ArtSpace and Studio Galleries will be The Pocono Arts Council’s Member Exhibition that will begin on Saturday May 3rd with an Artists’ Reception scheduled for Saturday May 17th as part of the town’s Art on Main event. This exhibition will be on display until May 25th. You’ll find more photographs taken during the April 4th Artist’s Reception for the current exhibit in The PoconoArts Community Cultural Center 2014 Gallery at www.facebook.com/media/set/?set=a.10152285998065421.1073741882.636000420&type=1.

In addition to the Bill Gothard exhibit being presented in The PoconoArts Community Cultural Center’s Artspace Gallery, their Studio Gallery offered a collection of Assemblages created by the late Morris Berman which were donated to PoconoArts by his daughter, Ilona Marmer. The work incorporates found objects to divulge the contradictions of modern life which depicts both the whimsical and poignant if it. The display of Mr. Berman’s work is an ongoing one and can be explored during the center’s business hours.

The PoconoArts Community Cultural Center is part of The PoconoArts Council which is an organization designed to build the communities in which it serves artistically and culturally by providing leadership, service, and education. It does so by offering avenues for artists to display their work through the center and other galleries, educational opportunities for those who would like to explore and/or enhance their creative natures, and encouragement to those who seek to express and/or support the arts. You’ll be able to learn more about The PoconoArts Council, The PoconoArts Community Cultural Center, and all they offer the creative community at www.facebook.com/poconoartscouncil.
Posted by Unknown at 7:32 PM