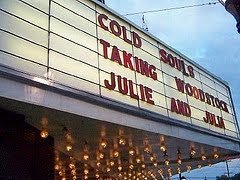 The film “Taking Woodstock” is based the later part of “Taking Woodstock: A True Story of a Riot, a Concert and a Life” which is a memoir written by Elliot Tiber who is portrayed by Demetri Martin. Earlier chapters of the book describes his early years and his awakening sexuality and alienation from his parents Sonia and Jack Teichberg as portrayed by Imelda Staunton and Henry Goodman. The experiences gays in the 1950s and 1960s are also explored in the book which included Elliot Tiber being beaten up and robbed by youths who targeted him because of his homosexuality. He also describes being present as The Stonewall Riots began at a bar in Greenwich Village on June 28th 1969.

The film itself begins sometime later in Elliot Tiber’s life while living with his parents in Bethel, NY, working in their motel, and serving as president of the Bethel Chamber of Commerce. When he learns the town of Walkill had decided not to allow the Woodstock festival to be held there, he telephones Woodstock organizer Michael Lang as portrayed by Jonathan Groff and tells him he has a valid permit to hold a rock festival and fifteen acres to hold it in. The film continues with a telling of how a small town in upstate NY became the site of the iconic concert known simply as “Woodstock.”

There has been many who criticize the film for not placing enough emphasis on the music which made the Woodstock experience what it was. Well, all this reviewer can say, with all due respect to his colleagues, this was not the film they would make. This is not the film this reviewer would have made, either. Instead, this is the film Ang Lee has made and the story from the memoirs he wanted to tell.

The film is not merely about some guy who helped organized what became an icon of the Hippie Movement of the late 1960s, but of a man realizing his own destiny through the exploration of the world (both inner and outer) around him. It is through his experiences we begin to see our place in the world by realizing how our changing perspectives often takes away life’s meaning as we become comforted what seems to be the normalcy of existence. Lee uses the spirit of the times to reveal this message and make it relevant for each person who watches the film.

Of course the scenes depicting Woodstock do produce a longing for those simpler times. Times when we could all just let it all hang out by just getting high and leaving our cares behind a haze of herb while we partake of the freedoms we have forgone for the responsibilities we find upon ourselves in the here and now. The reality of this remembrance of the youth of many audience member may be actual memories or fanciful flashback similar to those of the film’s recently returned Vietnam vet named Billy as portrayed by Emile Hirsch.

But, this is exactly the point film is making. It does not matter if our memories of our youth are real or embellished. What matters is the perspectives we had making the world a wondrous place to be alive in have changed. We can choose to accept our present lives are no more than what we perceive them to be or we can go back to an earlier mindset and utilize the lessons they have to teach us. This is the purpose of nostalgia.

The film is enjoyable to watch and is well worth the price of admission. Like the hippie movement, it entices its audience into the promise of a carefree experience while delivering a very worthwhile lesson in life relevant in any era. In other words, the film gives it’s viewers much more than a contact high.

“Taking Woodstock” is rated R and is currently running at The Pocono Community Theatre in East Stroudsburg, PA. You may call 570-421-3456 or visit their website at www.poconocommunitytheater.org for show times and dates. Most films run one week from Friday to Thursday but some films may be held over for an additional week or two depending on ticket sales.
Posted by Unknown at 11:10 PM

Your post is very intriguing about Woodstock. At the time, I was a 23 year old student at San Jose State. Although I didn't attend Woodstock, it was a turning point in movement politics at the close of the decade.