Being Hungry and Happy at The Bookhouse 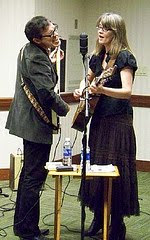 The Eastern Monroe Public Library* in Stroudsburg, PA presented The Folk Duo known as Hungrytown* on Friday September 25th as part of their Bookhouse Concert Series. After a brief introduction given by Rob Ramos*, the room became filled with the sounds of guitars and music reminiscent of the Appalachian Bluegrass stylings that never fail to bring a toe to taping or a heart to whisper a long forgotten melody to its owner. It was a night filled with established songs from the genre along with some original compositions which sounded like they could have been written during the same period as their qualities were consistent with each others.

The Duo consisted of Ken Anderson and Rebecca Hall whose voices meld together into a pleasing mixture while the tales they told relating to each song amused the audience to insightfulness. The rapport they built with the audience began with their accessible presence while people were coming into the Library’s Community room in which the concert was being performed. This is not usually done during an event of this nature for which the performers are often in another room waiting to go on. This change in procedure was very refreshing and encouraged a much more friendly atmosphere making the evening even more enjoyable.

The Website address of The Eastern Monroe Public Library* is www.monroepl.org while the Website Address for Hungrytown* is www.hungrytown.net. You can learn more about their music and their CD at this location. You’ll find more photographs in The Forwardian Arts Society Music 2009 Gallery. www.myspace.com/forwardian_arts

(*) denotes members of The Forwardian Arts Society in good standing and are considered Our Good Friends.
Posted by Unknown at 9:06 PM