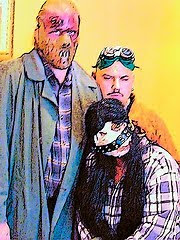 The Sherman Theatre* in Stroudsburg, PA present the films “Graduation Day” and “Night of the Creeps” on Thursday September 24th as part of their Severed Sinema* Series. The event also featured an exhibition of works by Artists John Kolbek* and Mike Parsons*. The entire evening consisted of an interesting balance of cheesy, yet fun films and some very compelling art works.

The screenings began with the film entitled, “Graduation Day” which was made in 1981 and directed by Herb Freed. It’s notable for presenting an early appearance of “Wheel of Fortune” letter turner Vanna White. The film begins with a track and field event which a young female Athlete collapses while crossing the finish line. Why she died, the film never attempts to answer. The film then cuts to the return home of the Athlete’s sister from the Navy just as murders of the remaining track team members begin to occur.

Although some of the camera work is impressive, the director never establishes any sense of suspense or even the shock the simplest of horror films obtain. It’s just a really bad and stupid film. However, this is exactly why it’s appealing. It’s as much fun to watch as it is to laugh at the absurdities of the plot and the attempts at acting.

The second film was entitled, “Night of the Creeps” which was made in 1986 and directed by Fred Dekker. Although not the greatest horror film ever made, it was by far a great deal better than “Graduation Day.” The acting, writing, and production values where much better which did produce not only some mild scariness but some truly intentionally funny bits.

The film began in outer space on an alien craft with one alien being pursued by two others. It is discovered the alien is carrying a cylinder containing a deadly experiment which it is determine to maliciously jettison into open space. It does so and winds up on earth in 1959 near a college campus. A young couple sees its fiery decent into the atmosphere and drives to it’s location. Upon their arrival, the young man begins his search while the young woman waits for his return.

Meanwhile, a deranged Axe Murderer who escaped from the local insane asylum, sneaks up on the woman and kills her. Meanwhile, the young man stumbles upon the cylinder and becomes infected by its contents which are small slithering leech-like animals that enters anything with a mouth through that orifice and incubates inside the body while it moves around like an undead Zombie. Meanwhile, a cop, who has had feelings for the young woman being murdered, comes upon the grisly act as it’s occurring and kills the axe wielding maniac. Are there enough “meanwhiles” here?

The film cuts to 1986 on the college campus. The cop is now a homicide investigator and the young man is kept in Cryogenic Hibernation in the campus medical center. Why he is there, the film doesn’t attempt to answer. Perhaps he is left there so long so some college students can come by to play a fraternity prank which involves stealing a body and placing it in front of a rival fraternity house. A good plan. It took 25 years later to make it work, but it’s a good plan.

The film also explored the romantic entanglements of young college students, regrets from the past, peer pressure, and, oh who the hell cares. This film was just fun. It was stupid but in a very intelligent way. The intelligence came from the occasional spoofing of itself and the entire B Movie genre containing all the icons found in the zombie, slasher, and alien creature invasion found in most of them.

Along with the films being presented as part of the Severed Sinema Series, the art work of Michael Parsons* and John Kolbek* filled the walls of The Sherman Theatre’s Lobby. Their intricate and hauntingly macabre imagery held a certain beauty which intrigues the human psyche. They proved to be heavily layered with symbolism which moved the viewer of each work to linger while allowing the piece entry into his or her subconscious. And, once it enters, it stays for a while.

The next installment of The Sherman Theatre* Severed Sinema* Series will be Friday October 16th presenting the films, “The Exorcist,” “Phantasm,” and a midnight screening of “Night of the Living Dead: Reanimated” which features over 100 animators contributing their own visions of the original film to create an experimental film of animated greatness. Special guests include local artists who contributed to the film and the musical guests Nu Pro Sta Kaif and Rooster Baby. The next presentation at The Sherman Theatre will be Raymond the Amish Comic Saturday October 3rd at 8pm.

The Website address of The Sherman Theatre* is www.shermantheatre.com while the Website Address for Michael Parsons* is www.myspace.com/michaelparsons26 and John Kolbek* is www.johnkolbek.com. You can view their works at these locations. You’ll find more photographs in The Forwardian Arts Society Film/Video 2009 Gallery. www.myspace.com/forwardian_arts

(*) denotes members of The Forwardian Arts Society in good standing and are considered Our Good Friends.
Posted by Unknown at 9:04 PM