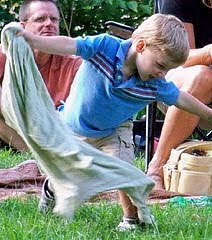 The Presbyterian Church of the Mountain (PCOM)* in Delaware Water Gap, PA presented the final installment of their Summer Gazebo Concert Series on Sunday August 30th featuring the sounds of Three Girls and a Guy with Guitars consisting of Concert Committee Chairperson Bonnie Childs* on Vocals and Guitar, Nancy Gould on Vocals and Guitar, Sandy Rader on Vocals and Guitar, and Marty Wilson* on Guitar along with Tony Dellaria* on Drums. The music began to play after Bonnie* introduced herself and the band.

What a treat this final concert for the summer season was. The music ranged from Cheryl Crow to the Beatles. Most songs had a Summer theme to them which proved to be bouncy while others had a more melodic quality which was matched well the harmonic voices of the three women. This was especially true of their rendition of the Crosby, Stills, and Nash classic, “Teach Your Children Well.”

The next concert in The Presbyterian Church on the Mountain (PCOM)* Gazebo Concert Series will begin in June of 2010 featuring a variety of musicians and musical styles. Please Contact Bonnie Childs* at 570-992-3934 for more information.

Here are links of groups and individuals I mentioned in this article for you to explore. The Presbyterian Church on the Mountain (PCOM)* www.churchofthemountain.org.

(*) denotes members of The Forwardian Arts Society in good standing and are considered Our Good Friends.
Posted by Unknown at 10:17 PM