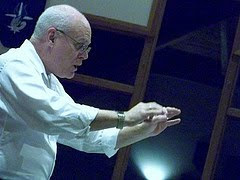 The Annual “Raise the Roof” Choral Concert combining several churches took place at The St. Paul’s Lutheran Church* in Tannersville, PA to benefit Habitat for Humanity of Monroe County* on Sunday September 20th. An evening of sacred music met supporters of this worthy cause whose mission it to eliminate substandard housing and homelessness worldwide by providing ownership of adequate housing to eligible families through no-interest mortgages.

Once the performances of the individual choirs were completed, they combined their voices to form one large choir presenting three magnificent pieces under the direction of Bob Riday* accompanied by Anne Austell and Gail Hines on Piano, Gary Raish* on Organ, and Bill Bellows on Drums. The concert concluded with some remarks by Habitat for Humanity of Monroe County* Executive Director Leslie M. Howes and others and with a Benediction given by the Reverend Dr. Thomas E. Richards, Jr. and the combined choir. A meet and greet followed which provided many to learn more about Habitat for Humanity of Monroe County*, the work it does, and how to become more involved.

The websites of The St. Paul’s Lutheran Church* in Tannersville, PA is www.stpaultannersvillepa.org and Habitat for Humanity of Monroe County* is www.habitatmc.org. Please Explore their Websites for more information. You’ll find more photographs on The Forwardian Arts Society Music 2009 Gallery. www.myspace.com/forwardian_arts

(*) denotes members of The Forwardian Arts Society in good standing and are considered Our Good Friends.
Posted by Unknown at 1:23 PM