A Gazebo rings of Abell 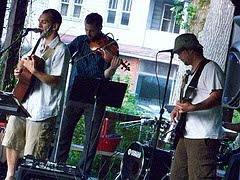 The Presbyterian Church of the Mountain (PCOM)* in Delaware Water Gap, PA presented another installment of their Summer Gazebo Concert Series on Sunday August 16th featuring some original songs along with some cover tunes set to a rock a billy beat as performed by the Matt Abell* Quartet which consisted of Matt* on Guitar, Kevin Legievi* (spelling may be wrong) of Pocono Duo on Bass Guitar, Mark Woodyatt on Violin, and Daniel Gonzalez* on Drums. The music began to play after an introduction by The Presbyterian Church on the Mountain (PCOM)* Concert Committee Chairperson Bonnie Childs*. The small audience were treated with the vibrant energies radiating from these young musicians whose songs were filled with a wide emotional range.

In fact, their rendition of the cover tunes they played enhanced their emotional qualities. Although setting a rock a billy style to songs like Michael Jackson’s “Beat It” and Lou Reed’s “Walk on the Wild Side” were cause for amusement, its treatment of Men at Work’s “Who Can It Be Now?” slowed the song down enough so those of us who experienced it in its original form can discover something new in its lyrics. This was especially true when the tempo of the song went even slower to emphasize its bridge.

The Next performance in The Presbyterian Church on the Mountain (PCOM)* Gazebo Concert Series will be The Dixie Gents on Sunday August 23rd beginning at 6pm filling the atmosphere with the lively sounds of Dixieland Jazz. Please Contact Bonnie Childs* at 570-992-3934 for more information.

Here are links of groups and individuals I mentioned in this article for you to explore. The Presbyterian Church on the Mountain (PCOM)* www.churchofthemountain.org, The Pocono Community Theater* www.poconocommunitytheater.org, and Matt Abell* www.mattabell.com.

(*) denotes members of The Forwardian Arts Society in good standing and are considered Our Good Friends.
Posted by Unknown at 9:51 PM