Narrative Watercolors at The Dutot 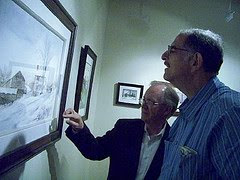 The Antoine Dutot Museum and Gallery* in Delaware Water Gap, PA held an Opening Reception on Friday August 14th featuring the recent work of Watercolorist Don Shoffner. A modest sized gathering moved among the images hanging upon the walls which depicted numerous out door settings. The majority of these settings took place during the winter season while a small number reflected a warmer climate. In either case, the entire work was impressive no mater what the season it depicted.

The stunning detail inherent in his work gave many of the pieces a photographic quality. In fact, I’ve learned during a conversation with Will Daskel* (another renowned watercolorist) and his wife that Mr. Shoffner’s approach to his creative endeavors is of a certain school of technique while other artists of the medium have a more abstract flavor to their work. While this information may be merely an academic exercise for some, it brought me a new appreciation for the medium.

However, one aspect that intrigued me went beyond the images and techniques from which they were created. It was the titles given to the pieces that caught my attention causing me to explore each piece more precisely. Many simply noted what was being depicted in the painting such as the name of the buildings and so forth while others reflected the narrative aspect the scene depicted. This made the work even more interesting as it allowed each viewer to participate in the creative process by offering an opportunity to explore an imaginary story in connection to what he or she was seeing within a particular frame.

Some of these narratives provided an amusing commentary on the subjects presented. An example of this is one piece entitled, “Early Morning at the Meeting House” which depicted a building surrounded by an empty landscape. The scene was void of any people, vehicles, or any indication anyone was nearby. It was amusing to me to realize here was a meeting house with no one around to have a meeting. This may have only been seen as funny to me, but subjectivity is part of what art is all about. Isn’t it?

Among those in attendance I did not mention earlier were Marty and Sue Wilson* of The Antoine Dutot Museum and Gallery along with Photographer/Artist Edgard Bernal*.

The next Opening Reception at The Antoine Dutot Museum and Gallery* will be on Friday September 11th beginning at 6pm of The Delaware Water Gap Celebration of the Arts (COTA)* “Music Motif Show” featuring a group show focusing on the theme of music and will be the opening event of the 32nd Annual COTA* Jazz and Arts three day festival. That Exhibition Continues until September 20th while the current one featuring the works of Don Shoffner continues until August 30th. Please Contact The Antoine Dutot Museum and Gallery* at 570-476-4240 for more information.


Here are links to websites of those I mentioned in this article for you to explore. The Celebration of the Arts (COTA)* www.cotajazz.org, The Antoine Dutot Museum and Gallery www.dutotmuseum.com, Will Daskel* www.willdaskal.com, and Edgard Bernal* www.bernalvisualart.com.

(*) denotes members of The Forwardian Arts Society in good standing and are considered Our Good Friends.
Posted by Unknown at 11:32 PM