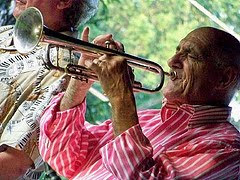 The Presbyterian Church of the Mountain (PCOM)* in Delaware Water Gap, PA presented another installment of their Summer Gazebo Concert Series on Sunday August 23rd featuring some wild sounds from The Dixie Gents which consisted of Jim Daniels* on Tuba, Nelson Hill* on Clarinet, Ray Schweisguth on Banjo, Rick Chamberlain* on Trombone, and Bob Leive* on Trumpet and Vocals. The music began to play after an introduction by The Presbyterian Church on the Mountain (PCOM)* Concert Committee Chairperson Bonnie Childs*. The medium sized audience were treated to the lively music filled with the southern hospitality this unique style of Jazz is best known for and played with a joyous bravado.

There was a shear and overwhelming sense of joy found in the musical performances as the boundaries between the audience and performers were continually crossed in a light hearted manner. The bouncy rhythm of the music were complimented by the amusing antics taking place within the small gazebo making them even more hilarious as the show progressed. And, then there were the hats which adored Mr. Leive from time to time adding another dileightful dimension to his performance.

The final concert in The Presbyterian Church on the Mountain (PCOM)* Gazebo Concert Series for 2009 will be Three Girls and a Guy with Guitars on Sunday August 30th beginning at 6pm featuring Bonnie Childs*, Nancy Gould, Sandy Rader, and Marty Wilson*. Please Contact Bonnie Childs* at 570-992-3934 for more information.

Here are links of groups and individuals I mentioned in this article for you to explore. The Presbyterian Church on the Mountain (PCOM)* www.churchofthemountain.org.

(*) denotes members of The Forwardian Arts Society in good standing and are considered Our Good Friends.
Posted by Unknown at 5:34 PM