The Fullness of a Flowering Moon 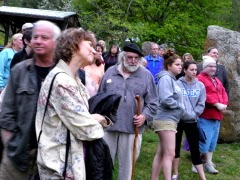 As an early evening sky filled with clouds formed a warm blanket over the earth, a field filled with healing rocks greeted a sizable number of people who came to celebrate the presence of the Full Moon which hovered over The Columcille Megalithic Park and Celtic Cultural Center in Bangor, PA on Wednesday May 14th. The many who gathered to share in the Full Flower Moon Celebration through incantations, music, and understandings enhanced the energies of the event with their positive countenances as conversations flowed from one love filled word to another. After a fire was built and other preparations were made, the ceremony for the evening began.

The gathering was led by Beth Guida and her husband George Guida who serve The Columcille Board of Directors as Vice President and President. Their welcoming words provided a wondrous foretaste of the loving peace those who gathered were to experience throughout the night. The celebration began as those who had brought special crystals or stones were invited to place them upon an altar within the circle of stones that resembles a prehistoric monument located in Wiltshire, England known as “Stonehenge” so they could be purified and re energized  throughout the night.

Attendees were then asked to step outside the circle to take paper and pencil in order to write what they would like to enter their lives to be later placed in the fire so the essence of their hopes could more freely mingle with the divine where all things originate from. They were then invited to be spiritually cleansed before re entering the circle and to walk its circumference in order to commune with each stone before taking their place to rest so they could experience the fullness of the evening’s offerings. As the procession concluded, opening words were shared which included greetings to the directional elements of North, South, East, and West along with invitations to their denizens to bring their energies to enhance the essence of the gathering. It was after this time did the leaders of the gathering began to share the traditions of the celebration and their deeper meanings derived from both the eastern and western faiths including those embraced by the indigenous people who inhabited what has become known as the continent of North America.

After this time, those who were present were invited to share their words and gifts with the gathering. These sharings included expressions of joys and concerns in which the company embraced with their hearts. There were also verbal explorations made into the nature of happiness and how we can become a larger measure of love. The evening concluded with some closing words given by the gathering’s leaders along with expressions of appreciation to the directional elements for bringing their healing essence to those who were touched by them. The circle dispersed as many gathered to share their experiences and the insights they inspired with one another while enjoying a variety of snacks (mostly chocolate covered ones) that were provided. You’ll find more photographs taken during the May 2014 Full Moon Celebration in The Special Events Gallery at www.facebook.com/media/set/?set=a.10152230295395421.1073741876.636000420&type=1.

The Full Flower Moon Celebration was a gathering open to all who feel called to participate in welcoming and honoring Grandmother Moon and her healing energies. The evening also commemorated the Wesak Full Moon which is the first full moon in Taurus and celebrates the birth of The Buddha. The Full Moon Celebrations take place monthly at The Columcille Megalithic Park and Celtic Cultural Center in Bangor, PA with the next event scheduled to take place Friday June 13th for the Full Strawberry Moon. The gathering begins at 7pm in the park’s stone circle with the ceremony commencing at 7:30pm. Those who wish to bring their drums, flutes, and other musical instruments along with any poems, songs, chants, or stories they would like to share are welcomed. Attendees are also invited to bring their crystals, gems, etc. for cleansing by the Full Moon energies. A sharing of “Tea and Treats” follows the event.

The Columcille Megalithic Park and Celtic Cultural Center in Bangor, PA began as a small house opened in 1975 by William Cohea Jr. called “Casa Colum (Gaelic for Home of the Dove)” to serve as (according to their website) “a ‘salon by the side of the road’ where ‘tired sinners and reluctant saints’ could drop by and share their experiences and ideas.” The formation of the park was inspired by a visit Mr. Cohea made to the Isle of Iona which is a small island in the Inner Hebrides off the Ross of Mull on the western coast of Scotland. An open space to welcome people of all faiths and traditions interested in renewal and transformation has since been created filled with Megalithic (large standing stone) Structures and numerous walking trails designed to enhance a deeper spiritual awareness to those who visit the grounds. Please explore The Columcille Megalithic Park and Celtic Cultural Center Website at www.columcille.org for more information.
Posted by Unknown at 10:22 AM