The Castle of Contrasts 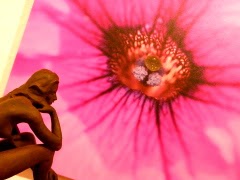 During an afternoon filled with the beauty of a warm Spring Day, The Castle Inn Gallery in Delaware Water Gap, PA held an Artists’ Reception on Sunday May 18th featuring the work of Jasmine Abrams www.facebook.com/pages/Art-by-Jasmine-Abrams/224830047530851 and Carol Van Geizen www.facebook.com/CrossroadsPhotos. A series of hues touched the senses as the contrast found in the creative approaches of both artists moved the eye deeper into the subjects they captured upon canvases and other surfaces. A dichotomy of sensations were created throughout the gallery as a number of pieces existed in a lightness of their spirit while others formed from the depths of their souls beseeching the viewer to seek out the image’s (as well as their own) light.

The marvelous beauty found in the depictions of (primarily) flowers painted by Jasmine Abrams reflect the singular and solitary beauty one can find within oneself. The striking colors and attention to detail entreats the viewer to embrace the image’s essence until the aesthetic barrier between them become all the more vague. A lightness touches the soul inspiring an esoteric dance to spontaneously spring forth as the blossoms embodied in both the images and the viewer blooms in their perennial glory. One can’t help but to smile when viewing Ms. Abrams’ work as there is an encouraged delight painted into each individual piece with each brushstroke.

In a contrast to Ms. Abrams bright hues, the darkened explorations found in the majority of the photographic pieces created by Carol Van Geizen harkens one to delve deeply into the images she presents as her use of shadows amplify the focal points of her compositions by highlighting them although they are very much a part of their dark environs. The effects Ms. Van Geizen’s work has on those who view it is enhanced by a surface upon which she prints the images known as Gator Board which produces a varnished like finish creating a reflective quality. This mirrored surface allows the viewer to see a blurred vision of oneself among the shadowy denizens of the piece. The process Ms. Van Geizen employs favorably reminds one of those utilized by the Dutch painter and etcher Rembrandt Harmenszoon van Rijn who lived in the 1600s and was know for his use of shadows in order to highlight the focal points of his compositions.

The overall quality of the work of the exhibit was of a very high caliber as the varying creative approach of each artist allowed the viewer to explore a variety of aspects contained in the presentations as well as within themselves. The Artists’ Reception at The Castle Inn Gallery in Delaware Water Gap, PA was a was a well attended one filled with wonderful conversations inspired by the work along with delicious food and beverages that enhanced the afternoon’s experience. You’ll be able to find more photographs taken during the reception in The Castle Inn 2014 Gallery at www.facebook.com/media/set/?set=a.10152288752440421.1073741885.636000420&type=1.

The Castle Inn Gallery in Delaware Water Gap, PA is curated by Jose and Maggie Santamaria who seeks to showcase local artists in an intimate setting conducive to allowing individuals who visit the venue to explore the work in a relaxed manner. The current exhibition featuring the work of Jasmine Abrams and Carol Van Geizen will be on display until June 20th. The artists featured in the gallery’s next exhibit are yet to be announced. Please Explore The Castle Inn Gallery Facebook Page for more information at www.facebook.com/pages/Castle-Inn-Gallery/159174520808670.

The Castle Inn Gallery is found within The Castle Inn located in Delaware Water Gap, PA. It was built in 1906 and was the last of the great hotels to be built in area. It housed an ice cream parlor, a mosaic floor, bowling alleys, a pool, and a billiard parlor. Performances were presented which included those given by Opera legend Enrico Caruso, Marching Band Leader John Phillip Sousa, and Big Band Leader Fred Waring and the Pennsylvanians. This all came to an abrupt end when fire touched the Inn during the 1970s and it laid dormant until 2005 when it was purchased by Theresa Veltri and Frank Paccione who continues their endeavors to bring the Inn back as an asset to the community and all who visit it. You’ll be able to learn more about The Shoppes at The Castle Inn and all they have to offer by exploring their Facebook Page at www.facebook.com/historiccastleinn?ref=ts&fref=ts.
Posted by Unknown at 3:24 PM

Paul,
It appears the exhibit was to your liking. I enjoyed your professional critic. It was refreshing, and dare I say,"Artistic." Thank you.
Steve Malysz M.S.