A Glorious Choral at ESU 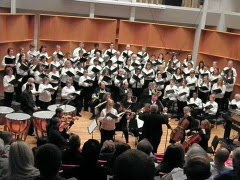 The East Stroudsburg University (ESU) of PA Music Department presented their Spring Choral Concert in The Cecilia S. Cohen Recital Hall which is located within the Fine and Performing Arts Center on Wednesday April 30th. The concert consisted of performances of a variety musical offerings presented by the university’s A Cappella Ensemble and its Concert Choir who presented a special performance of Francis Poulenc’s composition titled, “Gloria” with a Chamber Orchestra. The entire presentation was pleasing to the ear as the voices of the singers blended beautifully with one another as well with the instruments that accompanied them.

The A Cappella Ensemble began the concert and was led under the direction of Associate Professor James Maroney. After a welcoming introduction given by Marcus Howard, the members of the ensemble took their place upon the stage and were soon followed by their director. From the very first notes emanating from the ensemble’s lips to the final echo of the concluding melody, the gathering of singers touched the heart of the listeners with their thoughtful renditions of the songs they shared. After the ensemble’s performance concluded, a brief intermission took place.

The East Stroudsburg University’s Concert Choir consisting of students, faculty members, and those who dwell in the university’s surrounding communities entered the hall. They were led under the direction of Associate Professor James Maroney and were accompanied by Pauline Fox who performed on piano. The choir began with a moving piece composed by Felix Mendelssohn titled, “Heilig” for which the chorus was physically divided up in two sections so they could conform with the intention of the piece which was written for two choirs. After some rearranging of positions, the choir continued with a composition written by David C. Cickau titled, “If Music Be The food of Love” inspired by the Theatrical composition written by William Shakespeare titled, “Twelfth Night.”

It was after the completion of this piece did Prof. Maroney share a series of appreciations to those who helped make the evenings performance possible along with a number of anecdotes relating to the process in preparation for the performance. This was followed by a presentation of the Robert L. Wehe Jr. $500 Vocal Scholarship to this year’s recipient who was Marcus Howard so he may continue his studies in music at ESU. This interlude ended with the announcement the chamber orchestra was ready to take their place upon the stage and there would be a moments to move about and share some conversation while the musicians set up their instruments.

An excited din filled the concert hall as the anticipated arrival of the presentation of Francis Poulenc’s “Gloria” came closer to being experienced. The sounds of musicians tuning their instruments further excited the audience as each note made to compliment the work through its desired pitch brought the performance all the more within the hearing of it. Associate Professor James Maroney took his place before the musical gathering as a silence that accompanies a stilled breathing filled the hall until the first notes of the composition opened the lungs of those who waited.

Each movement of “Gloria” was filled with subtle musical phrasing that led the listener upon melodious journeys which challenged their perception. This was especially true during several movements when the vocal patterns seem un speech like as the music encircles one into a mist of sounds that leads one upon an adventure of the esoteric. Ms. Tara Nylander lent her powerful soprano voice to a number of the movements complimenting their essence to a great degree. The final notes of the composition was met with a contemplative silence that was followed by an internal recognition between the soul of work and that of each audience member leading to an embracing applause. You’ll be able to find more photographs taken during the East Stroudsburg University’s Spring Choral Concert in The ESU 2014 Gallery at  www.facebook.com/media/set/?set=a.10152286011965421.1073741883.636000420&type=1.

The East Stroudsburg University of PA Music Department next musical presentations will include their 27th Annual Spring Band Concert on Sunday May 4th featuring the University/Community Concert Band under the direction of Otis French. The next Choral Concert will be the Winter Choral Concert scheduled to take place on Wednesday December 3rd at The Cecilia S. Cohen Recital Hall. Students and faculty along with members of the community are invited to participate. Rehearsals take place every Tuesday evening from 7:15pm until 9:15pm beginning Tuesday August 26th. Please Explore The ESU Vocal Performing Arts Facebook Page at www.facebook.com/pages/ESU-Vocal-Performing-Arts/103816162994926 for more information.
Posted by Unknown at 10:45 AM