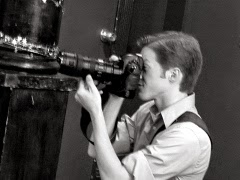 A touch of the Goth appeared outside The Sherman Theater’s Living Room Stroudsburg, PA on Sunday May 18th. A small but hearty number of people were adorned in dark hues and paled makeup reminiscent of the Goth subculture that was prevalent during the 1980s and 90s. However, in a departure from the solemn countenance associated with the style, these individuals displayed an exuberance as they prepared themselves for  another installment of the venue’s weekly Open Mic Nite Series.

I shared in their waiting and it was during this period did I meet Matt Smith who is a Photographer for The Express Times www.lehighvalleylive.com/expresstimes which is a newspaper located in Easton, PA. He shared with me that the publication was embarking on a study of Open mic Nites taking place throughout its readership area. He had visited several events and tonight would mark the last leg of his adventure. Throughout the evening, he was seen taking photographs and making notations as he endeavored to reflect the occurrences through a series of images and words.

Anyways, as the time for those who wished to participate in the evening’s festivities came near, the multitude (Goths and others) came together in order to join in the joyous ritual of affixing signatures to the laminated sign in sheet so their names (or nom de plumes) would be provided with an opportunity to share their talents before a welcoming audience. The time eventually arrived and numerous hands touched the pen from which their desires flowed.

Some time had past as the hour for the performances begun and it came as co host Jessie (aka JR) took the stage at the appointed hour to welcome those who were present. She then proceeded to share some of her original poetry with the gathering who were touched by her words. She was followed by co host AP Box www.facebook.com/APbboxes4u who was joined on the stage by Kidd Marvel www.facebook.com/TheKiddsWorld?ref=br_tf who shared some rap with each other along with some dance moves. They were followed by Brad Mills who was joined by AP Box and Melissa Johnson as he sang the song titled, “Royals” by Lorde. He was then left on stage following the song to perform his own composition based upon a line from it. Brad was followed by Dave Pugh on acoustic guitar who began his set with the song titled, “Wish You Were Here” by Pink Floyd and concluded with a love song that played a chord upon the heart.

As the final notes of Dave’s performance echoed upon the walls found within the audience’s beings, Benjamin Ordonez came upon the stage to share a number of poems that were familiar to the group. He was followed by another poet known as “The Carlton” whose rapid delivery of his powerful words flooded the ears with their meaning. He was followed by Jesse Morales who is usually seen with a guitar or ukulele in hand but he held a computer upon this occasion filled with poetic words which were moved by his emotions as a number of them were dedicated to a girl and the course of their relationship. Jesse was followed by yet another poet by the name of Amy Knopf whose words moved by their own power until we realized our own. Our realization of our abilities became especially evident to us as she shared the creative process of her work and our souls found a familiarity in her experiences.

A break ensued as the final echoes of Amy’s words filled the air. A great deal of inspired conversation populated the venue as the concepts revealed through the music and words up to that point moved the consciousness of the many who were presented during their utterances. In what seemed a very short time, the break concluded and the next performer was invited to take the stage.

Melissa Johnson prepared to share her magnificent voice as co host AP Box joined her in what resembled an operatic interlude before presenting a series of songs upon which AP added his verbal percussions. They concluded their set with a requested piece titled, “Radioactive” by the group known as “Imagine Dragons” which appears on their 2012 album titled, “Night Vision.” They were followed by guitarist Kess who was accompanied by co host Andrew Oldfield on drums. Kess performed a number of songs enjoyed by the gathering including his signature composition titled, “The Traveler’s Song” to which the company sang along. As Kess’ set came to an end, co host Andrew remained on stage to ask some questions from selected members of the audience in order to provide all present an opportunity to learn more about their comrades. The questions were: “Where did you go to High School?,” “What year did you graduate?,” and “What is an unusual thing about you?” The answers were revealing.

While ponderings of what was discovered still populating the minds of those who listened, guitarist Nick Fuentes took the stage. It was noted by the co hosts Jessie and AP that he performed during their first visit to the venue and was one of the reasons they fell in love with the event. The performance he provided this night wooed new lovers to the venue as his thoughtful words filled with social commentary touched a chord in many a mind. Nick was followed by the duet known as Woodrow www.facebook.com/wearewoodrow who consists of Theresa Ratliff on vocals and Brian Bramkamp on vocals and guitar. Together they sang a series of songs that moved in and out of the subconscious including the composition titled, “White Rabbit” written by Grace Slick of The Jefferson Airplane.

It was with the performance by Woodrow did the official list of performers came to an end. However, there was still time allotted to the event and those whose had placed their names upon the waiting list were now given the opportunity to share their talents as well. The first of these was guitarist Jared Saied whose voice touched the soul while the instrument he played held it in its embrace. He was followed by Kevin Tails Moucha who sang a number of pieces a cappella and was well received. Kevin was followed by duet who were newcomers to the gathering. It consisted of Mimi on vocals and Greg on guitar. Together they performed a soulful version of Tracy Chapman’s Blues Classic “Give me One Reason” from her 1995 album titled, “New Beginning.” Mimi’s mesmerizing voice moved among the gathering as they traveled with her and Greg upon every note. They were followed by Matt F whose poetry encircled the crowd with its emotions as he expressed his thoughts relating to his mother.

The event concluded with Matt’s words and co host Jessie took the mic to share her farewells. Included in her words were some encouraging sentiments Matt Smith from The Express Time shared with her. She then expressed her appreciation to all the wonderful occurrences she had witness since she began coming to The Living Room and noted the venue was aptly named due to the loving camaraderie that is felt throughout every nook and cranny of the structure. It was after these loving words did the company depart with the desire to return to the venue the following week to partake all it has to offer once again. You’ll be able to find more photographs taken during the Sunday May 18th Open Mic Nite Session in The Living Room 2014 Gallery Part 3 at www.facebook.com/media/set/?set=a.10152343904050421.1073741890.636000420&type=1.

The next installment of the Living Room Open Mic Nite Series will take place on Sunday May 25th beginning at 7pm with sign ins beginning at 6:30pm. Musicians, poets, writers, and anyone who would like to share something with a receptive audience are welcomed to do so. You can learn more about The Living Room Open Mic Nite Series and the All Star show by Exploring their Facebook Page at www.facebook.com/OpenMicAtTheLivingRoom.

In addition to the Open Mic Nites presented at The Living Room, the venue also holds a Gallery which presents the work of visual artists from around the area. Their current exhibition is titled, “Art-ology” and features the work of artists from around the area. Their next exhibit will take place in June with artists whose names are yet to be announced. Please contact the gallery’s Director and Curators, Keyaira and Drew Ozkenel, at 570-421-2808 for more information.

The Living Room is located on Main Street in Stroudsburg, PA next to The Sherman Theater who owns the building. The Living Room is a non-profit artspace and community hub featuring live music, performance, and other events in an intimate setting at affordable prices. Please Explore The Living Room Facebook Page at www.facebook.com/pages/The-Living-Room/123978921059378 for more information on The Living Room, all they have to offer, and how to be a part of it all.
Posted by Unknown at 3:27 PM