A Day in May for the Arts 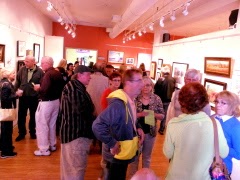 On a day following one filled with torrential rains, the bright hues of the sunshine of Spring colored the sidewalks of Stroudsburg, PA as its annual Art On Main event took place throughout the town on Saturday May 17th. Although the focus of the activities were centered around area of the town known as the courthouse square, a number of offerings and opportunities to partake of the arts were presented in other locations as well. These included The Soho in The Burg Gallery, The Living Room Gallery, and the newly formed Pocono Black Box Theater.

My day began as I traveled to town from my residence on foot which afforded me with an opportunity to peacefully enjoy the climatic splendor of the day as well as the scenic surroundings one barely notices while being transported by any other mode. I arrived in town to find Clavertis Miller www.cmillersfineart.photoreflect.com setting up his space on the corner of 6th and Main in order to fill it with his creative endeavors for passerbys to experience as they explored the offerings of the day. The intricacies and colors embodied in the images touched my eye and I felt Mr. Miller’s creativity was a wonderful vision to partake of as I was introduced to the Art On Main event.

After I greeted Mr. Miller and chatted with him on a variety of subjects, I stepped across the street to the adjacent corner to meet with the denizens of The Soho in The Burg Gallery www.facebook.com/sohointheburg. It was there where I saw James Chesnick www.carzwellco.com and Susan Molina-Washington taking advantage of the beauty of the day as they placed their paint filled brushes upon their canvases who were patiently waiting upon their easels to be filled with the colorful images they would soon absorb. Many passerbys paused as the artists playfully affixed their talents to the canvas while others moved into the gallery’s interiors to partake of the wonders of their current exhibit titled, “Spring Fever” which will soon be followed by their “Sailing into Summer” exhibition in June. You can read about The Spring Fever Artists’ Reception in our article titled, “The Feverish Effects of Spring” at www.facebook.com/notes/paul-adam-smeltz/the-feverish-effects-of-a-soho-spring/10152047490101232.

I eventually left the Soho in The Burg in order to journey to the newly opened Pocono Black Box Theater www.facebook.com/thepoconoblackboxtheater as I’ve received word auditions for The Pocono Shakes www.facebook.com/poconoshakes 2014 season’s productions of plays written by William Shakespeare were beginning that day. The plays that are scheduled to be presented during 2014 are “Romeo and Juliet” and “A Mid Summer’s Night Dream.” Watching Director Richard Rose guide the actors as they made their internal preparations for the roles they sought to fill entreated me to complete an audition form and ply my 30 year dormant theatrical skills to the endeavor of being a part of the production. Unlike my counterparts, I stuttered and stammered through the monologue but I think I did ok. Time will tell as I’ll receive a call regarding their casting decisions in the near future.

I eventually left the theater and returned to the outside world where I was met with a display offering the work created by those who had won the 8th Annual “Fine Art” Parking Meter Competition presented by The Pocono arts Council. Paper bags covered with artistic renderings from various groups and individuals adorned the parking meters that aligned the streets of Stroudsburg. I joyfully explore each creative endeavor until I caught sight of The Happy Pipe Hookah Lounge www.facebook.com/pages/The-Happy-Pipe-Hookah-Lounge/272837069403557 which I’ve been meaning to visit for quite some time but haven’t had the opportunity before that day.

Upon entering the relaxed venue, I found myself transfixed by the array of Hookahs that adorned the establishment. The venue was empty when I arrived so the owner and his friend were watching scenes from talent competitions on a television monitor they had selected from an internet website. I eventually left The Happy Pipe and returned to the Soho in the Burg to share my experiences in the theater with all who would listen. As one can imagine, I was quite excited from catching the acting bug after so many years of being a non participant in the theater. My friends at the gallery patiently listened and I eventually left the graceful presence to venture to the courthouse square to partake of the art and activities that were offered there.

As I turned the corner at 7th Street, my eyes became transfixed by the array of art that was presented along with offerings from art related and community organizations who sought to provide opportunities for the event’s attendees to participate in their worthwhile endeavors. They included entrancing images displayed by Photography by Claudia dutchmom26@icloud.com, robustly beautiful pottery by Margaret Benson, exquisite jewelry and earthen works created by Pias Pottery www.facebook.com/pages/Pias-Pottery/174573692582169, some stunning and vibrant art created by Sandy Lopez, and hand beaded jewelry by Carol’s Customized Creations crs4@ptd.net. Representatives from The Totts Gap Art Institute www.facebook.com/TottsGapArtsInstitute?ref=br_tf and The Pocono Community Theater www.facebook.com/PoconoCommunityTheater were present to share their offerings with passerbys as was Monroe County Meals on Wheels www.facebook.com/mealsonwheelsstbgpa who sought volunteers to lend their time to their worthwhile endeavors.

Some soft sounds of jazz and other musical genres provided by Barry Fields filled the air as I wandered among the Artists, Artisans, and organizations inhabiting the area. The deft touch of his guitar and thoughtful voice echoed throughout the square encircling each visitor to the location with a peace enhancing the time and conversation shared to be a more meaningful one. However, as the time for the cultural centerpiece event for the day was about to begin, I reluctantly left this atmosphere to partake of the wonders awaiting me within The PoconoArts Community Cultural Center.

The walls of The PoconoArts Community Cultural Center were filled with a plethora of work created by the numerous members of The PoconoArts Council. Over 70 pieces were presented throughout the Center’s Artspace Gallery in a display representing the variety of styles and creative approaches embodied in the organizations membership. The unique qualities of each piece seemed to challenge the ability of those who hung the work to discern a pattern in which the exhibit could be viewed with any coherence. However, the differing qualities of the individual pieces when placed together created a patchwork pattern that inundated the senses while allowing each viewer to breathe in the beauty they encountered so they could embrace it with their hearts.

The PoconoArts Council presented a number of awards to the artists who demonstrated a great deal of talent and proficiency in their creative endeavors. The enormity and the outstanding caliber of the work proved to make the determination of who deserved the honors associated with the awards a difficult one. This audacious task went to Lenore Fiore-Mills, Emily Thompson, and George Thompson.

In addition to the PoconoArt Member exhibit being presented in The PoconoArts Community Cultural Center’s Artspace Gallery, their Studio Gallery offered a collection of Assemblages created by the late Morris Berman which were donated to PoconoArts by his daughter, Ilona Marmer. The work incorporates found objects to divulge the contradictions of modern life which depicts both the whimsical and poignant if it. The display of Mr. Berman’s work is an ongoing one and can be explored during the center’s business hours.

After the awards ceremony concluded, I ventured outside the center to experience the performance of the Lost Ramblers whose rendering of Blue Grass and Folk tunes enlivened the crowd who heard them. They were followed by The SheilaMark Duo www.facebook.com/pages/SheilaMark-Productions/103115099805573 whose bluesy renditions of the songs they performed pierced through the audience as the clarion voice of Ms. Sheila Stratton echoed throughout the square accompanied by Mark Hamza on Accordion. It was with these sounds did the Arts On Main event draw to a close. It was a wonderful day filled with art, conversations, and memories to keep within oneself. You’ll find more photographs taken throughout the day in The Evening on Main 2014 Gallery at www.facebook.com/media/set/?set=a.10152438416450421.1073741898.636000420&type=1.
Posted by Unknown at 3:22 PM