A Storm of Sculptures for UUFP 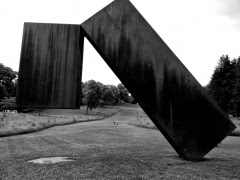 On the final day of July (which was Thursday the 31st), members and friends of the Unitarian Universalist Fellowship of the Poconos (UUFP) ventured out of the Pocono, PA area and into the Hudson Valley region of New York State in order to explore the magnificence of a Sculpture Park located at The Storm King Art Center in Mountainville, NY. Many of the company of adventurers met at the UUFP location in Stroudsburg, PA around the 8am hour to honor the environment by practicing the art of car pooling. From there, two car loads of thoughtful Unitarians and friends left for the communal destination with each traveling different routes while a third vehicle left the site in order to pick up additional friends and members from their homes.

The route of the car I was in led us upon the highways that traveled across the states of Pennsylvania, New Jersey, and New York. This route proved efficient in regards to the time it took to arrive at the destination during the early morning hours. However, a number of scenic vistas came to our attention and we were moved to stop at one in order to partake of its life enhancing beauty. After journeying through more areas filled with the sights of tremendous rivers, flourishing forests, and impressive rock formations, we eventually took the exit ramp in New York State that brought us even closer to our destination which led us to discover several small towns that shared their quaintness with our wandering eyes along the way.

As we arrived to our destination, we went through the entry gate and moved our vehicle to the north parking lot where UUFP members Barbara and Bob Harteis welcomed us with an adorned picnic table with a few culinary goodies in place for those who wished to replenish their energies as they prepared for the art filled treks they would soon experience. The remainder of our company arrived a few minutes later and, being indicative of the independent spirit Unitarians are noted for, the gathering instinctively divided into smaller groups and began their walking tour of the site. The experience would later prove to be an even more individualist one as conversations later in the day would reveal that the work each viewer encountered effected the soul and thoughts in very unique ways.

I was immediately impress with the vastness of the site. The rolling hills with their staggering steepness, the endless fields with their towering blades of grass, and the variety of forests with some protruding from the ground like islands in a grassy sea while others framed the picturesque scene with their wooded beauty enticed the exploring nature of the human soul to delve deeper into its natural majesty. In more common words, it was wow.

Throughout the park, a huge number of sculptures were waiting patently to be discovered. The enormous presence of these gigantic structures touched the imagination through their ability to reach so high into the heavens while blending seamlessly into the topography of the landscape. In fact, it was near impossible not to cultivate a desire to be lifted up upon their pinnacles in order to partake of the breathtaking sensations their intoxicating dimensions while simultaneously immersing oneself in the earthy hues they submerged themselves in. Along with the multitude of pieces on permanent display, there were a number of them which were presented as special exhibits for the park.

One these exhibits was titled, “Zhang Huan: Evoking Tradition” which featured the incredible peaceful work of Zhang Huan who began his career during the 1990s in Beijing, China where he created a body of work that was frequently politically engaging as it touched on issues such as poverty and personal freedoms. He moved to New York in 1998 and expanded his skills there until his return to China in 2005 inspired him to reconnect with the traditional elements of Chinese society. The gentleness and peace found in the country’s Buddhist faith is found throughout the work presented at The Storm King Art Center whose size of the pieces magnifies their serene qualities.

In addition to the structures presented as a special exhibition in the park along with some that will remain on permanent display at the Storm King Art Center, some relatively smaller works created by Zhang Huan was on display at the center’s Museum Building. These include ash sculptures which are crafted from incense ash gathered from Buddhist temples along with Marquettes (preliminary models), drawings, and video offering insights to the artist’s inspirations and creative process. The entire display will be presented at the center until November 9th. You can learn more about the artist and the display by exploring the special Storm King Art Center website at http://zhanghuan.stormking.org.

Another of The Storm King Art Center’s special exhibits that was on display is part of their yearly Outlooks Series and features the work of Virginia Overton. Ms. Overton lives in Brooklyn, NY and has exhibited her work throughout the world. Her untitled piece can be found in one of the Storm King Center’s hay fields and consists of a brass tube which is four inches in diameter and is elevated above the ground. The length of this installation is 500 feet and those who visit it are encouraged to speak into one end as another person would be able to hear what one says on the other end.

Virginia Overton is the second artist invited to participate in the center’s Outlooks series which invites emerging or mid-career artists who has demonstrated a particular facility and promise in working outdoors to create a temporary work of art specifically for The Storm King Art Center. The installation was organized by Nora Lawrence who is the center’s Associate Curator. The work will continue to be on display until November 30th. You can learn more about the artist and the display by exploring the special Storm King Art Center website at http://overton.stormking.org.

After touring the grounds and partaking a portion of what the center has to offer, the company of friends and members of the UUFP gathered at the picnic table to share a meal with one another. It consisted of a variety of nutritious delights which were as lovingly unique as the person who bought the delectable contribution to the pot luck cuisine. It was during this time a number of topics were explored relating to the esthetic discoveries of the day. This did much to feed the soul of those who shared in this meaningful conversation and ignited a desire to explore more of the grounds when the meal had concluded.

While some sought to venture once again upon the landscape on foot, many took advantage of the tram that the park offers its many visitors. The vehicle traveled over a great deal of the park’s vast areas but, in recognizing it could not realistically touch every area of the site’s offerings in any truly satisfying manner, the tram frequently stopped so those wishing to partake of a more intimate experience with both the art and the natural surroundings could freely do so. While many members and friends of the UUFP of disembarked from the tram at different times, I chose to explore the park after the meal by tram and remained on it until it returned to the point which I embarked upon it. My feet was tired.

I was pleased to see several more of the sculptured pieces than I did during my walking expedition of the park before returning to its picnic area. It was a while after this time did my friends and I gathered together so we could embark on our journey home. Thoughts of returning to this serene park over a more extended period of time filled my mind as in doing so I could explore the work presented more deeply and learn more of each pieces essence and all it has to share with me. In a reflection of our unexpressed communal desire to linger a little while longer with the discoveries of the day, we found a scenic overlook before leaving New York state from which we found ourselves further enchanted by the beauty encompassing the Hudson Valley Region. The experience of viewing the splendor of the rock formations and the river that flowed through them reinforced by desire to return and I most certainly will. You’ll find more photographs taken during the day’s event in The Special Events 2014 Gallery at www.facebook.com/media/set/?set=a.10152230295395421.1073741876.636000420&type=1.

The Storm King Art Center is located near the town of Mountainville, NY which is in the Hudson Valley region of New York State. Its season of operation runs every Wednesday through Sunday from April until November. The center complements its permanent installation of sculpture with a variety of special exhibitions which include smaller works and supporting materials shown in the center’s Museum Building. Exhibitions include both works from Storm King’s permanent collection and loans from artists, private collectors, galleries, and museums. In addition to the sculptures they have on display, the center holds special events such as screenings of short films presented upon a screen erected upon it’s vast landscape, weekend Wanderings and Wonderings programs designed to provide a more imaginative exploration of Storm King, and their Annual Gala Dinner and Auction whose proceeds are gathered to support the park. You can learn more about The Storm King Art Center and all their offerings by exploring their Facebook Page at www.facebook.com/StormKingArtCenter or their Website at www.stormking.org.

The Unitarian Universalist Fellowship of the Poconos (UUFP) is located in Stroudsburg, PA housing a congregation which strives to create a place where people can feel inspired to see, hear, and think in ways that deepen their understanding of life, themselves, and each other. The excursion to The Storm King Center was introduced to the fellowship by member David Learn and supported by members Barbara and Bob Harteis. Service are held every Sunday Morning at 10am and all are invited to attend. You can learn more information about the UUFP and all they offer the community by exploring their Facebook Page at www.facebook.com/UnitarianUniversalistFellowshipOfThePoconos or their Website at www.uupoconos.org.
Posted by Unknown at 5:58 PM