A Decade of Blues 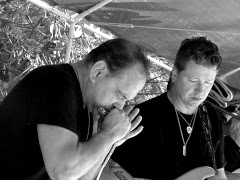 The 10th Annual Bushkill Blues Festival took place at the Lehman Township Community Park located in Pike County, PA on Sunday August 10th. SheilaMark, Teddy Young and the Aces, and The Merchants of Groove performed throughout the beautiful Summer day which was enhanced by the serene atmosphere provided by the park’s natural setting. Although each band played an individual set, musicians from all three ensembles played together in support of each other and the wonderful music they shared a love in.

I arrived at the festival site as Teddy Young (the festival’s organizer) and the Aces were performing. I immediately became transfixed by their musical stylings as I endeavored to set up my folding chair in order to enjoy the day. Their melodic riffs and chord changes inspired a soothing sensation among the crowd while leading them through a journey in which each note served as a stepping stone to their soul. The band consisted of Teddy Young (who is considered a world-class guitar player and has toured extensively throughout North America) on vocals and guitar, Rob “Frog” Fenstermaker on Bass Guitar, and Neil Longo on drums.

Mark Hamza of SheilaMark was also on stage to lend his talents to the performance with the Hammond B3 Organ. During their set, Teddy Young and the Aces were joined by Sheila Stratton (also of SheilaMark) who lent her incredible vocals to a number of pieces adding a nuanced substance to each song her soulful phrasing blessed. You can learn more about Teddy Young and the Aces by exploring their Facebook Page at www.facebook.com/pages/Teddy-Young-and-the-Aces/276059545819671 and SheilaMark from their Facebook Page at www.facebook.com/pages/SheilaMark-Band/152690641429026.

A break ensued after the performance and I took advantage of the time to explore the natural surroundings of the park as well as to engage in some delightful conversations with the many Blues Lovers who populated the grounds. I thoroughly enjoyed the discoveries I encountered in the visual and verbal scenes I came upon. I met a number of festival goers by the food concessions set up by The Bushkill Outreach who were also offering raffle tickets and other items whose proceeds were gathered to provide food, clothing, and services to needy families in the Pike County, PA area. You can learn more about Bushkill Outreach and all they do to enhance the lives of those living in their community by exploring their Website at www.bushkilloutreach.org.

As the break come to a conclusion, The Merchants of Groove came on stage to fill the air with their kick ass rhythms that shook the crowd with their beats encouraging many to bop and weave their heads while listening with their entire being. During their set, the high octane nature of the majority of the songs they performed allowed a contrast to manifest itself when they occasioned to present more thoughtful pieces that spoke to the heart of each listener through the language of pathos. The Merchants of Groove consisted of Paul Lyon on vocals and guitar, Joey “Hotbox” Simon on harmonica, and Mike Basalyga on drums.  Rob “Frog” Fenstermaker remained on stage with his Bass Guitar as did Mark Hamza with the Hammond B3 Organ and Teddy Young with his Guitar. You can learn more about The Merchants of Groove by exploring their Facebook Page at www.Facebook.com/merchantsofgroove.

The day was filled with sights and sounds to wander and ponder as the magnificence of the 10th Annual Bushkill Blues brought a delight to all who were touched and enlivened by the music. Although I left before the festival was officially over, I could already tell the many who attended the event would be eagerly awaiting the 11th Annual Bushkill Blues Festival which will take place in 2015 when it’s final notes did arrive. I count myself among the eager many. You’ll find more photographs taken during the festival in The Bushkill Blues Festival 2014 Gallery at www.facebook.com/media/set/?set=a.10152627620760421.1073741908.636000420&type=1.

The Annual Bushkill Blues Festival is a free event and is open to the public. It takes place in the Lehman Township Community Park which located on Winona Falls Road in Pike County, PA. The Festival was founded by Teddy Young and is sponsored by Lehman Township Supervisors John P. Sivick, Richard C. Vollmer, and Paul Menditto. You can learn more about The Annual Bushkill Blues Festival by exploring their Facebook Page at www.facebook.com/BushkillBluesFestival.
Posted by Unknown at 1:45 PM