The Art of Dog 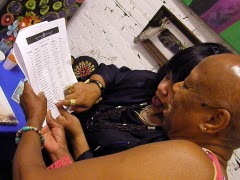 The School of Visual and Performing Arts (SVPA) in Stroudsburg, PA held an Artists’ Reception on Saturday August 16th for their exhibition titled, “Dog Days of Summer” featuring the work of local artists. To many, the term from which the exhibition’s title derives reflects the searing temperatures associated with the scorching aspects of the season which usually occurs at its zenith during the month of August. However, as the Summer of 2014 in the Northeast Section of PA has been a practically cooler one than normal, the atmospheric heat needed to be generated so the exhibition’s title would have any merit was left to the gallery and the work it presented.

The bright searing colors found in much of the work brought their sweltering essence to those who were drawn near to the warmth they emitted while some pieces shared their brightness through some cooler hues hinting at the temporal realities of the season. The well attended event also generated a warming trend as conversations filled with love and excitement for the art being displayed filled the gallery and hearts of those who engaged in them. The entertainment and creative demonstrations which took place throughout the evening would serve to enhance the congenial warmth shared by the gallery’s visitors.

These began with a Tai Chi demonstration which was proceeded by some welcoming words given by the gallery’s director, Jody Singer, along with several announcements relating to the school and future exhibitions. Shane Izykowski also shared his welcoming sentiments with the gathering along with news relating to the much publicized Street Art Project: II www.facebook.com/projectstreetart and how local artists and art lovers can become involved through their skills and support as the video found at www.youtube.com/watch?v=0s7lvad7jbw describes in detail. A special Fund Raising event will take place at the school on Saturday August 23rd. It was after these sharings did the Tai Chi demonstration given by Kevin Cormier of Glowing Energy Tai Chi www.facebook.com/pages/Flowing-Energy-Tai-Chi/216868115041521 begin.

Several members of the gathering took their places in their stoking feet upon the specially matted floor reserved for the dance lessons the school conducts while Mr. Cormier offered a basket filled with slips of paper to individual spectators so they could select from them a series of concepts in which those participating would explore through their movements. The gentleness observed by those who viewed the exercise found its way in the countenance of all as a profound quietness was felt among the entire gathering. In addition to his work at Glowing Energy Tai Chi, Mr. Cormier also teaches these ancient techniques at Ensley’s Martial Arts in Stroudsburg, PA www.facebook.com/pages/Ensleys-Martial-Arts/111545085551893 and owns Burnt Toad Studios www.facebook.com/burnttoadstudios offering screen printed tees and other items and art stuff. The demonstration came to its conclusion leaving all with an appreciated sense of peace and wholeness which enhanced their experiences of the reception as the evening moved on.

A delight filled the air as it was announced that a touch of musical theater was to be presented. The song titled, “So In Love” from the Cole Porter musical “Kiss Me Kate” was performed by the school’s Senior Theater class members Gil Janes as Joseph and Theresa Hunter as Olivia with direction provided by Shellie Bransford who is the course’s instructor. The presentation was a joy to watch as the talent of the actors danced lightly into the hearts of those who viewed them. The conclusion of the performance was followed by some appreciatory sentiments expressed by SVPA’s facilitator, Kathy Kroll, who also invited those present to explore the school’s schedule of classes and discover the enormity of their wonderful talents through them.

An opportunity to explore the work further and to purchase raffle tickets so those who did so would be eligible for a chance to win a piece created by one of the many artists whose work hung upon the walls was affored as a break in the evening’s entertainment ensued. While doing this, The Mountain View Vineyard and Winery www.facebook.com/MountainViewVineyardWinery which is located in Stroudsburg, PA offered a variety of their satisfying blends of wines for sampling. The tasty elixirs enhanced the conversation further as the musical performance of the evening began to take their place.

From the very first notes Jazz Saxophonist Adam Niewood played upon his instrument led those who gathered for the art and conversation to become transfixed to its melodious sounds. Mr. Niewood has gained a reputation for his talents in the local jazz community and beyond and those who listened to his musical blendings were pleased to learn this reputation has been well deserved. Mr. Niewood was joined by his musical friends which included Gene Perla on Upright Bass, Vaughn Soffey on Guitar, and Bill Goodwin on Drums. Each musician has become well known for their outstanding talent with their instrument in their own right, but, together, the gentle beat of the music they played filled the room as only the best jazz could.

It was when the performance given by Adam Niewood and his friends concluded did the invigoratingly soothing effects of the music soon became accentuated by the announcement that the evening’s Art Raffle, whose proceeds would be utilize toward the endeavors of The School of Visual and Performing Arts as it continues to serve the artistic community, would soon take place. Many hurriedly moved toward those who were designated to provide the tickets for purchase so they could be placed in cups corresponding to the coveted pieces of art that were offered as prizes. Last moment selections among the cups were being made as Jody Singer and Shane Izykowski joined together to begin the exuberant process of calling the numbers who would determine who won each item.

It was then when the artist who donated a piece for the raffle were invited to come forth in order to pick a numbered ticket from the cup that were placed before his/her creative endeavors which was held beautifully by the even more beautiful Ashley Catherine Fontones whose elegance enhanced the qualities of the work she touched. A quietness filled the air until it was shattered by an exclamation of piercing delight as the final digit called revealed the winning ticket’s owner. This joyful process of acquisition of art continued until the final item was awarded to its new owner and the evening began to experience a number of fond farewells that were shared among the company as they began to leave.

The evening proved to be a profoundly wonderful one reflecting the wonderful aspects of the Summer season through the marvelous work presented, the mindfully peaceful Tai chi demonstration, the delightful show tune performance, the delectable wines that were wantonly sampled, the mood enhancing jazz, and the climatic excitement that come from winning some wonderful art to adorn the walls of their home. Yet, everyone who gathered at the SVPA for the Artists’ Reception of their Dog Days of Summer Exhibition took something with them to adorn their soul as well. You’ll find more photographs taken during the Artists’ Reception in The SVPA 2014 Gallery at www.facebook.com/media/set/?set=a.10152519973960421.1073741905.636000420&type=1.

The School of Visual and Performing Arts is located in Stroudsburg, PA and has been instrumental in the creative development of its students for over 20 years. The facility holds classes in dance, ballet, and movement led by Diane Verdi, Paul Heeschen, and Kathy Kroll as well as classes in the theater arts led by Jazmin Ospa and Shellie Bransford. The school also offers a number of workshops with each focusing on a variety of creative disciplines. You can learn more about The School of Visual and Performing Arts by exploring their Website at www.schoolofvisualandperformingarts.org.

The exhibition titled, “Dog Days of Summer” will be on display in The School of Visual and Performing Arts until September 15th. Their next exhibit is titled, “Changing Seasons, Changing Scenes” with an Artists’ Reception scheduled for Saturday September 20th beginning at 6pm. The exhibit will continue to be on display until October 13th. All area artists are welcomed to participate by placing their work related to the theme in the exhibit.  The drop off dates are September 18th and 19th. Please contact Jody Singer at mountainsidearts@hotmail.com for more information.
Posted by Unknown at 9:53 AM