Threading the Needle for The COTA Tapestry 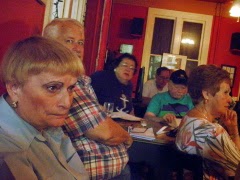 The Celebration of the Arts (COTA) held its general meeting at The Deer Head Inn in Delaware Water Gap, PA www.facebook.com/deerhead.inn on Monday August 11th to plan their 37th Annual Jazz and Arts Festival which is scheduled to be held September 5th - 7th. A great number of Jazz and Festival fans attended the meeting while sharing the anticipation of another year filled with the magic of the event. These included a number of newcomers to the meetings who were eager to serve the festival and all it brings to the community through their willingness to volunteer in the many opportunities the festival provides those who want to help.

The meeting began with the introduction of Constable Jeff Williams of the Delaware Water Gap Police Department. He was welcomed by the gathering and a great deal of the ensuing conversation with him related to the relationship the department and the festival has had in the past and will have during the upcoming event. As the conversation with Constable Williams concluded, it was announced Bob Widner will now be the new official COTA Photographer as David Coulter has left the position. It was also announced a birth of a child to one of the celebration’s longtime volunteers but I neglected to get their name. Still, I shared with the gathering their communal congratulatory expressions to the parent and child as well as to all who were mentioned.

In the commencement of making the final preparations for the festival, some upcoming activities were shared with the group. These included the annual clean up of the site by the members of this year’s COTA Cats who are high school students who receive special musical training by seasoned Jazz musicians and will perform during the festival as an orchestra. The date for the cleanup is set for Saturday August 17th and those who wish to join these hearty students are welcomed to do so.

It was also mentioned that the process of preparing other physical needs of the festival site such as placing fences around the ground’s perimeter and the raising the stage’s tarp is scheduled to begin Saturday August 23rd. The later often proves to be a spectacular event reminiscent of tent raising events provided by traveling circus in days of old. Those who wish to partake these hearty endeavors are also welcomed to do so.

Many more topics were shared and discussed until the meeting came to its conclusion. However, the adjournment did not vacate the Inn as many lingered in order to share more conversations about the festival and how their lives were in general. The next general meeting scheduled to be held at The Deer Head Inn in Delaware Water Gap will be on Tuesday August 26th beginning at 6:30pm. The public is invited and encouraged to attend this and all future meetings as all ideas are welcomed and opportunities to participate as volunteers are provided. You’ll find more photographs taken during the Monday August 11th meeting at The COTA Meetings 2014 Gallery at www.facebook.com/media/set/?set=a.10152423759645421.1073741897.636000420&type=1.

The mission of The Celebration of the Arts (COTA) is to present and to support the art of jazz in all its forms and historical breadth through youth education, performing arts presentations, scholarship opportunities, and community outreach throughout the Pocono area. Please Explore The Celebration of the Arts Facebook Page at www.facebook.com/pages/COTA-Celebration-Of-The-Arts/234094683405815, their Website at www.cotajazz.org, or by calling 570-424-2210 to learn how you can become a volunteer and to learn for more information all about COTA has to offer.
Posted by Unknown at 1:47 PM