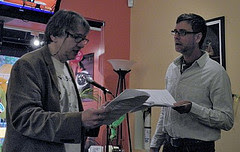 The Cheeky Monkey Coffeehouse in Stroudsburg, PA held workshops relating to the 16th/17th Century Poet/Playwright William Shakespeare on June 4th and 5th as led by Richard Rose and #Patrick Bresnyan of Shakespeare in The Poconos (aka PoconoShakes). The first workshop was titled “R-Rated Shakespeare” exploring lines from Shakespeare’s classics not shared in school curriculums and other delicate venues. It proved to be a fun evening allowing the participants to penetrate the depths of many of the well known soliloquies along with those which had been stricken from the original text throughout the ages due to their apparent improprieties.

This revelation in regards to the works of who is considered the best writer of the English language being subject to censorship may be incredible to many. However, the workshop’s facilitators continued to point out one example after another of how many words were either deleted or change to meet the sexual and social sensibilities of the times they touched. Sadly, this continues even unto the present day as school systems seek to appease the restrictive moral standards of the parents whose children they seek to enlighten.

The second workshop was titled “Speak the Speech: Shakespeare Alive” and was again led by Shakespeare in The Poconos (aka PoconoShakes). This workshop offered an opportunity for attendees to engage in putting the bard’s words into action through an insightful exploration of the lines and how they define and anticipate the actions about to take place. It was also mentioned an actor performing Shakespeare would be wise to contemplate why the bard placed a particular work in a specific part of the play. You’ll find more photographs in the Cheeky Monkey 2011 Gallery at www.facebook.com/forwardian.dude.

Shakespeare in The Poconos (aka PoconoShakes) consists of a group of Shakespeare aficionados who are endeavoring to promote the experience one has while studying performing the works written by William Shakespeare. They are a very new group hoping to hold more workshops as well as presenting productions of the works throughout the area. You’ll be able to obtain more information about the group as well as learning how to participate by emailing them at Poconoshakes@gmail.com.

Future events at The Cheeky Monkey include their Open Mic Night with Takes place every Tuesday evening, The “Just Say It: A Spoken Word Symposium” events which take place every Thursday evening, The Forwardian Arts Society Film Lovers’ Gathering on Friday June 24th, and an Artist’s Reception featuring the work of Laura Bee on Friday July 1st beginning at 6pm. The Exhibition continues until September 1st. The Cheeky Monkey Coffeehouse also offers a variety of coffee, drinks, and culinary treats along with events such as the one described in this article. Please Explore The Cheeky Monkey Coffeehouse Website at www.cheekymonkeycoffee.com or Call 570-420-8222 for more information.
Posted by Unknown at 7:11 PM