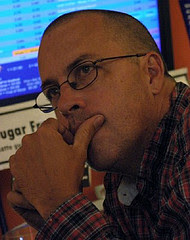 The Cheeky Monkey Coffeehouse in Stroudsburg, PA held a Closing Reception on Wednesday June 29th in order to celebrate the work of David Ohkerling. The exhibit began adorning the walls of the coffeehouse Friday May 6th as part of their Espresso Yourself Art Shows Series. Those who visited to obtain a beverage, a snack, or partake of their numerous events were treated to the expressionistic images representing the downtown area and the people who reside within it.

For those who frequent the town during its arts celebrations, David Ohkerling can be seen standing on the sidewalks with his paints and easel ready to capture the scenes he’s presented with that day. Much of his work depicts the architecture of the town of Stroudsburg while a number of his pieces captures the images of those enchantingly curious onlookers who happen to meet his creative glance.

The buildings and people who find themselves in David’s work can consider themselves quite fortunate as his talent honors his subjects while drawing those who experience the pieces into each of them through his vibrant use of colors. There is also a flow to his imagery which reflects the speed in which his paintings are created while maintaining a sense of cohesive recognizably for the objects he records through his brushwork. By all accounts available to this writer, this is not an easy balance to obtain and much can be said about David’s talent by this criterion alone. Yet, there is much more to his talent than this and those who were fortunate enough to witness it during its run at The Cheeky Monkey are certainly an appreciative bunch.

The music for the reception was provided by Jeni Hackett whose voice and guitar has proved to be a favorite among those who attend the events that include music at The Cheeky Monkey. Tonight was no exception as her melodious voice first touched the words of the songs she played and then the faces of those who listened inspiring smiles emanating from the heart. You’ll find more photographs taken during the reception in The Cheeky Monkey 2011 Gallery at www.facebook.com/forwardian.dude.

The next event held at The Cheeky Monkey will be an Artist’s Reception on Friday July 1st featuring the work of Laura Bee beginning at 6pm as part of their Espresso Yourself Art Shows Series. The Exhibition continues until September 1st. Also, The Forwardian Arts Society will hold a Film Lovers’ Gathering on Friday July 15th beginning at 7pm featuring a free screening of a film and followed by a discussion of it. Those who attend the gathering will be afforded the opportunity to suggest what film will be shown during their August get together. The Cheeky Monkey Coffeehouse offers a variety of coffee, drinks, and culinary treats along with events such as the one described in this article. Please Explore The Cheeky Monkey Coffeehouse Website at www.cheekymonkeycoffee.com or call 570-420-8222 for more information.
Posted by Unknown at 2:12 PM