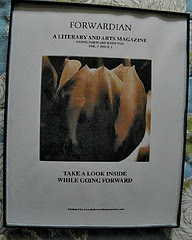 The Forwardian Arts Society held an Artists’ Reception on Saturday June 18th at The Sarah Street Grill in Stroudsburg, PA for their Juried Exhibition titled, “Cover to Cover.” The exhibition was designed to determine whose work will be featured on the front and back covers of the next issue of their literary and arts magazine “Forwardian” which is due to be available online in August 2011. In addition to the announcement of whose work was chosen, the event included a variety of poetry and musicals entertainment. The reception proved to be a wonderful time for art lovers to gather and share their appreciation for the profound beauty to be discovered within the many aspects of the arts as well as within themselves.

The afternoon began with an opportunity to explore the works and meet with their creators. The conversations that ensued inspired a new appreciation for the depths of each piece as well as new friendships. The wine and cheese provided by The Sarah Street Grill, which was purchased through the generous donations of members within The Forwardian Arts Society, enhanced the conversations greatly as they flowed into the atmospheric ambiance of the words, thoughts, and dreams of all who engaged in them.

The Reception continued with the announcement of those whose work will appear on the covers of The Forwardian Arts Society Literary and Arts Magazine “Forwardian.” The honor of appearing on the back cover went to Kim Pollard for her work entitled, “Night and Day.” The honor of appearing on the front cover went to James Chesnick for his work titled, “Spring Tulip.” The selection of which of the submitted work was to become the front and back covers of the next issue of “Forwardian” proved to be a daunting tasks for the exhibition’s jurors as the entire body of work presented in the exhibition represented the very highest standard of quality of artistic endeavor found among the creative community The Forwardian Arts Society welcomes into its fellowship.

The jurors for the first “Cover to Cover” exhibition are Andrea Robbins-Rimberg whose work appears in the National Museum for Women in the Arts archives in the Washington, D.C. and she is currently the Art and Photography Director of “Forwardian.” In addition to Andrea, Barbara Robinson, who is an award winner at the Pocono Arts Council and Delaware Water Gap Celebration of the Arts Jazz and Arts Festival, and Christa Connolly, who serves as curator of The Sarah Street Grill gallery, also painstakingly selected the works to appear on “Forwardian’” third issue.

Artists and photographers who submitted their works alongside those of Kim Pollard and James Chesnick included Jill Nobles, Garth Woods, Christa Alford, Jeffrey B. Strunk, Joann Castillo, and Chris Berger. Eeach individual artists and photographer brought a vision to the exhibit which enriched the perceptions of all who viewed them. The works of those presented on previous issues of “Forwardian” were also presented during the exhibition. They include “Butterfly Princes” by Barbara Courouble which appeared on the Front Cover of their fist issue and “Charlie in Hiding” which is also by Barbara Courouble appearing on the Front Cover of their second issue. Leslie Nagy’s work titled, “Winterthur” appeared on the back cover of “Forwardian’s” first issue while Marie Altenburg’s work titled, “White Gloves and Pearls” was presented on the back cover of the magazine’s second issue. Both Barbara Courouble and Marie Altenburg had additional work presented in the exhibition.

There was a sacred stream flowing among the entire body of work which bathed the viewers with its cooling and nourishing waters. Those who chose to partake of the elixir soon found themselves refreshed. Journeys of both an internal and external manner were experienced while their thoughtful embankments led many to a new perspective as they moved forward toward their individual and communal destinations. Yet, there were more provisions waiting to be stored for consumption as the afternoon progressed.

Poetry met the ears of those attending the gathering as words shared by Emmitt Henry Derrick, Debbie Burke, Patty the Poet, Valerie Cruz, Tony Puma, and Pat Kett gave further nourishment to the soul. Some poem inspired contemplation, others a new way of looking at things we see everyday, and others lightened the heart through laughter. All reflected the variety of literary work of high quality “Forwardian” has gained a reputation for presenting literature, poetry, and images relating to any topic, subject matter, or style as its creator intended.

In the midst of an intermission between the poetic readings, Holly Avila performed her original works upon her guitar. Her songs included those which delighted the soul with their melodies along with others designed to enrage the spirit of her listeners to political action. She was joined by a young man whose bluesy performance on harmonica and electric guitar entranced the crowd into a discipleship of the musical form.

The Reception concluded with some closing remarks encouraging those gathered to learn more about The Forwardian Arts Society, their literary and arts magazine, “Forwardian,” and themselves. The majority joyfully lingered to reacquaint themselves with the art and artists while establishing means to stay in contact with those they met. You’ll find more photographs taken during the reception in The Forwardian Arts Society 2011 Gallery at www.facebook.com/forwardian.dude.

In addition to gallery presentation of art and photography, The Sarah Street Grill offers an enticing cuisine served in a relaxed and inviting atmosphere. This atmosphere is enhanced by the musical entertainment available to their clientele along with events such as wine and beer tasting events and functions designed to benefit the financial needs of community minded endeavors. Please Explore The Sarah Street Website at www.sarahstreetgrill.com or call 570-424-9120 to lean more about the establishment and all it has to offer.

The next event to presented by The Forwardian Arts Society will be their Film Lovers’ Gathering to be presented at The Cheeky Monkey Coffeehouse located at 526 Main Street in Stroudsburg, PA near The Sherman Theater. This month’s Film Lovers’ Gathering will take place 7pm on Friday June 24th featuring a free showing of the film, “Flowers in the Attic.” The screening will be followed by a discussion of the film and those attending will be given an opportunity to suggest what film will be shown and discussed during the Friday July 15th gathering.

The “Cover to Cover” exhibition being presented at The Sarah Street Grill began Thursday June 2nd and will continue until June 29th. The next visual arts exhibition to be presented by The Forwardian Arts Society is presently in the planning stages and information regarding it is hoped to be available soon. Please Explore The Forwardian Arts Society Website at www.theforwardianartssociety.com to learn more information about this and other events along with all they have to offer the creative community.
Posted by Unknown at 3:46 PM

Great event! I always look forward to meeting new + interesting people at your events, Paul. Keep it up.
--Deb Burke