Londinium Calicos at The Gazebo 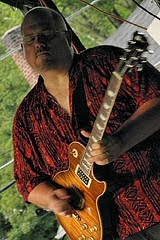 The Presbyterian Church of the Mountain in Delaware Water Gap, PA present Chris London and the Calico Jacks as part of their Summer gazebo Concert Series on Sunday June 26th. A large number of music lovers came to the gazebo during the early evening hours to have their senses engaged with the bluesy rocking music the band has become well known for. This well deserving reputation is owed in great part to the talents of Tony Dellaria who performs on drums, Skip Detrick who performs on percussion, Dwight Spencer who performs on keyboards, Dave Pacsh who performs on bass guitar, and Chris London himself who performs on Lead Guitar as well as providing the vocals for the incredible music they play.

If the concert was held indoors, one might be able to say this band rocks the house down. However, since the wonderfully seasonal Summer Weather allowed the concert to be performed out among the natural surroundings the town of Delaware Water Gap is best known for, another cliché needs to be developed to reflect the marvelous musical magnitude experienced by the crowd that evening. Perhaps this cliché could be something like “they pleased the trees” as the limbs of the trees surrounding the grounds could be seen shaking as if they were clapping their hands in their ecstasy. Regardless of the description one endeavors to place upon the performance, it was way cool. You’ll find more photographs taken during the concert at The PCOM Summer Gazebo Concerts 2011 Gallery at www.facebook.com/forwardian.dude.

The next musical performance presented in their Summer Gazebo Concerts Series will be Sweet Sue Terry and dangerous Sax on Sunday July 3rd beginning at 6pm. The concert is free and open to the public. Please Explore The Presbyterian Church of the Mountain Website www.churchofthemountain.org call 570-476-0345 for more information about the concert and all they have to offer the community.
Posted by Unknown at 4:17 PM