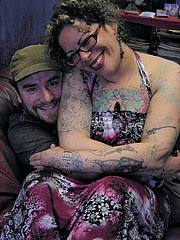 The Dreamland Creations in Stroudsburg, PA held an Artists’ Reception on Sunday June 5th for The Mythology Show. As with all shows shown at the Tattoo Studios, it afforded an opportunity for local artists to present their work in a welcoming setting devoid of more constricting atmosphere found in a traditional gallery. While these galleries often only accept works which would be relatively easy to sell to a conservative audience, the work presented at The Dreamland Creations has become well known for presenting art that is on the cutting edge slicing into the skin of society and allowing the pain to inspire a sense of reality a more mundane art observer would be most complacent to ignore.

The work presented in The Mythology Show serves to be an example of this cutting edge approach to art as each artists is free to explore the mythologies of the past and present along with those that may define themselves in the future. The pieces displayed ranged from the traditional stories of gods and goddesses told throughout the eons to those originating with the artist’s imagination. These were the most interesting of the works as they challenged the viewer to create their own ending of the stories if, indeed, there were any to be discovered.

Yet, there was much to be discovered inside and outside the frames during the reception. The majority of this was from the work presented upon the walls but a good deal of it derived from the conversations which emanated throughout the gallery. Some were centered upon the images and meanings found within the work while others touched upon the mythologies we encounter throughout out lives in the areas of finances, family, and love. Words flowed like the wine that was offered as tears and laughter was shared washing the soul of all the remnants it no longer wishes to employ.

The Dreamland Creations in Stroudsburg, PA serves as a studio where individuals can adorn their forms with a variety of body art such as tattoos and piercing reaching out to the vast community of conventional and non mainstream artists throughout the area. Their next Artists’ Reception will feature numerous artists who will present their work for an exhibition titled, “The Collaborations Show.” The reception will take place Sunday August 7th beginning at 4pm. The Exhibition will continue until September 26th. Please Explore The Dreamland Creations Website at www.myspace.com/dreamlandcreations or call 570-421-6313 for more information about the artists, the current and future exhibitions, and all they have to offer.
Posted by Unknown at 7:16 PM