Zardoz at The Monkey 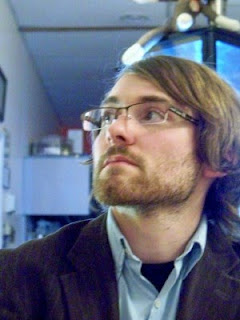 The Forwardian Arts Society held their monthly Film Lovers’ Gathering on Friday October 1st to see the 1974 film “Zardoz.” The gathering was a new experience as it was the first to meet at their new venue at The Cheeky Monkey Coffeehouse in Stroudsburg, PA. The screening and the subsequent conversation about the film that followed was enhanced by the comfortable atmosphere of this new venue.

“Zardoz” is a personal favorite of mine and that is why I chose it for the first film to be shown in our new venue. In 1974, my father signed up for a new service for our television set that recently began broadcasting. It was called, “Home Box Office (HBO)” and it featured first run film uncut and unedited. The first film I saw was “Zardoz” and, as a 14 year old boy, I became entranced by the amount of nudity it presented. Even though this fascination with the female form stabilized after first hand experiences of it, the film still held my interests through its deeper philosophical implications on social and spiritual issues.

The film is about two societies existing in the year 2293. One is referred to “The Brutals” who are mortal and live their lives throughout a post apocalyptic world and “The Eternals” who are immortal and live their carefree lives in great elegance inside their dwelling called “The Vortex.” One of the eternals create a god named “Zardoz” who breeds some of the Brutals to exterminate other Brutals. One of these exterminators named “Zed” (portrayed by Sean Connery) penetrates the Vortex and brings a much yearned for end to the eternals’ immortality.

The conversation following the screening explored many aspects of the film. While some remarked on the beauty of it’s imagery, others speculated on what types of hallucinogens the film maker was on during its creation. There were also some discussion on the religious and social overtones of the film as well.

Such discussion noted in a world filled with death a savior coming into it may promise eternal life but a world in which there is already eternal life a savior may offer death for its redemption. Thus the former helps the world by encouraging its inhabitants to focus on things beyond their present reality (ie “Be in the world but not of it”) while the later brings more meaning to the life we live by placing a time limit on what we do. In other words, we should do what is good for ourselves and others and tell those we love that we love them now because there may be no later.

The Forwardian Arts Society is a fellowship for people who love the arts seeking to enhance the creative community by encouraging those interested in the arts to go forward toward their dreams, by supporting those groups and individuals who are manifesting their dreams through performances and/or presentations, and by loving them and all they do. Their next Film Lovers Gathering is scheduled to take place on Friday November 5th at 7pm at The Cheeky Monkey Coffeehouse in Stroudsburg, PA. The film shown will be one selected by ballot and its screening is free to the public. Please feel free to contact The Forwardian Arts Society to learn how you can participate4 in the selection process.

The Cheeky Monkey Coffeehouse offers a free crepe with the purchase of a beverage to attendees while they’re watching the film. Also, those who wish to enjoy a small meal and fellowship prior to the screening are welcomed to come around 6pm to do so. There are many culinary treats on their menu available for purchase. Please Explore The Cheeky Monkey Coffeehouse Website at www.cheekymonkeycoffee.com or call 570-420-8222 for more information.