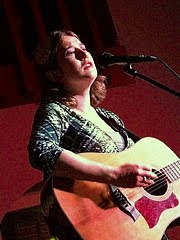 The ArtMusic Coffeehouse in East Stroudsburg, PA presented Seattle singer/songwriter/singer Anna Coogan on Friday October 22nd. After a performance of soothing meditative music given by host Don Slepian, Ms. Coogan and her guitar took the stage to mesmerize the audience further with her powerfully haunting voice. A painting created by her cousin Ali Walsh provided a visional backdrop providing some additional depth to the performance as it was utilized for the cover art of her most recent CD titled (as is the piece), “The Nocturnal Among Us.”

Although the majority of the songs sung by Ms. Coogan were her own compositions, she did perform some songs written by other artists. However, her interpretation of these songs took the listener beyond the outstanding qualities of the original performance and allowing them to experience a new higher level as they found new meanings to the older melodies. A thoughtful silence covered the audience like a blanket as they thoughtfully absorbed the entirety of Ms. Coogan’s musical stylings.

Along with the wonderful music, the evening also included an opportunity to enjoy some delightful conversation and some delicious culinary treats which included some tempting chocolate donuts. A peaceful and welcoming environment never fails to engulf those who come visit the house which many has come to feel at home. The ArtMusic Coffeehouse is not only a place one can go to hear some great music; it is also a place one can experience love. You’ll find more Photographs in The Forwardian Arts Society ArtMusic Coffeehouse Series 2010 Gallery at www.myspace.com/forwardian_arts.

The ArtMusic Coffeehouse holds its concert series in the home of Don Slepian and Jan Julia who reside in the borough of East Stroudsburg, PA. A variety of musical forms are presented including folk, jazz, classical, and electronic music. Although the concerts welcomes all who wish to attend, seating is limited as it they take place in a private home. The Next The ArtMusic Coffeehouse Concert will feature Barnaby Bright on Saturday November 6th beginning at 8pm. Please Explore The ArtMusic Coffeehouse Website at www.ArtMusicCoffeehouse.com or Call 570-476-6307 for more information and to reserve your seat.
Posted by Unknown at 1:38 PM