Theatrical Review: “The Last of the Red hot Lovers” 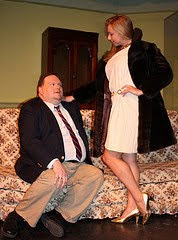 The Shawnee Playhouse in Shawnee on the Delaware, PA is currently presenting their production of the classic comedy “The Last of the Red hot Lovers” written by a Master of the genre Neil Simon. The play was written and performed in the late 1960s during the “sexual revolution” and is a parody of the movement. The play centers around a man named Barney Cashman (as portrayed by Rob Ramos) who is married and referred to as a “Nebbish” which is a Yiddish word meaning “A person regarded as weak-willed or timid” who wants to have a fling after being married for 23 years. He meets with three women in his mother’s apartment at various times in order to fulfill his romantic (not just sexual) desires only to realize his wife is the only woman for him.

Like all good comedies, “The Last of the Red Hot Lovers” by Neil Simon has an underlining serious message to convey. It would do well for any production to acknowledge this and not let it be misplaced in the comedic presentation of the play. However, if a production focuses too much on the serious message of the play, it ceases to be a comedy. It still could be good theater, but the play stops being funny.

The values of Shawnee Playhouse production were outstanding. The set was well constructed and made one feel they were viewing a NYC apartment in the late 1960s. The acting by Rob Ramos was excellent as he has a faithful grasp of the character. The remaining cast which included Megan Rucidlo as Elaine Navazio, Kaitie Kaiser as Bobbie Michele, and Tess Slovis as Jeanette Fisher were also excellent. But there was just one thing missing from the theatrical experience. Laughter.

It may have been part of the famous “Opening Night Jitters,” but it seems to this reviewer the members of the cast took their characters and the situation they found themselves in a bit too seriously. In doing so, the audience found little to laugh about as the solemn aspects of the characters’ nature were presented without the diluting effect of humor. It might have been funnier if they characters lightened up and not see themselves so seriously.

Also, this reviewer heard a lot of funny lines uttered during the production. However, they went by so fast, one could hardly hear or register them in one’s mind to realize their humor. Perhaps an adjustment to the production’s timing and delivery would make it funnier and inspire more laughter from the audience.

However, this reviewer did mention the “Opening Night Jitters” and these flaws in the production may iron themselves out during it long run. It’s still a good play with some very good acting. So, I would recommend seeing it with the hopes there will be some laughter in your heart after you see it.

The Shawnee Playhouse production of “The Last of the Red Hot Lovers” by Neil Simon was directed by Daniel Gaouette and Staged Managed by Byrdie Jacques as assisted by Stephanie Clare who also served as the Sound Board Operator. The Scenic Artist was Tiffany Goarcke. Scot Cleaveland served as the Production’s Scenic Designer and Technical Director as assisted by Stephen Sury along with Phillip Benefield who served as Technical Apprentice. Marshall was The Lighting Designer and Board Operator with Michael Demyan serving as the production’s Master Carpenter and Adam Benefield provided some original incidental music. Missy Benefield served the production as its costumer. Properties for the production were obtained and maintained by Mike Mille and Trevor James. The Shawnee Playhouse producers are Ginny and Charlie Kirkwood with Midge McClosky serving as the playhouse‘s Executive Director. The Box Office Manager is Mary Horn as assisted by Becky Haskell. Barbara Ross, Christina McManus, and Ariel Hudak serve as the Box Office Staff. Amy Cramer serves as The Shawnee Playhouse’s Publicist.

Photograph provided by The Shawnee Playhouse.
Posted by Unknown at 8:31 PM