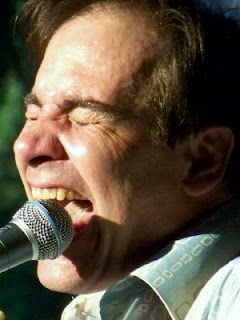 The Presbyterian Church of the Mountain in Delaware Water Gap, PA presented another installment in their weekly Summer Gazebo Concert Series on Sunday July 18th and rocked the town in the process. Bobby Kyle and Friends www.bobbykyle.com killer (or should one say Kyle r) performance shook the gazebo, the town, and the audience to their very foundations. A great number of people gathered for the concert which was a mixture of established fans of the band and those who know coming to the gazebo will be a great way to spend a Sunday afternoon.

After being introduced by James Delaria, Bobby Kyle ripped apart a can of kick ass blues which he not only opened with his guitar but with his powerful voice as well. Keyboardist Dwight Spencer, Bass Guitarist George Skrba, and Drummer Tony Delaria joined in to ad texture and even more substance to the compositions. The quartet played some standards along with some original work satisfying those who have come to know them as well as making new friends. You’ll find more photographs taken during the concert in The Forwardian Arts Society PCOM Gazebo Concerts 2010 Gallery at www.myspace.com/forwardian_arts.

The Presbyterian Church of the Mountain (PMOC) holds their weekly concert at their Gazebo every Sunday from 6pm until 7:30pm running from the months of June until August. They are free and open to the public with concessions available for purchase. When it rains (or rain is expected), the concert moves inside the church itself. Their next installment of their Gazebo Concert Series will be Mark Hamza and the Great Swamp Blues Band on Sunday July 25th. Please Explore The Presbyterian Church of the Mountain Website at www.churchofthemountain.org or call 570-476-0345 for more information.
Posted by Unknown at 7:31 PM