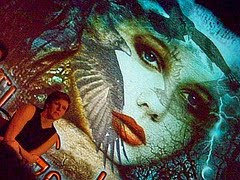 The Shawnee Playhouse in Shawnee on Delaware, PA presented a staged reading on Thursday July 29th of an original poetic dream play composed by Christopher Centrella titled, “The Good Mother” as part of their Fireside Theatre Series. The evening began as the author introduced the play noting it was a work in progress and invited the audience to stay after the presentation to share their thoughts which would provide valuable feedback as he intended to continue the creative process and re-write some of the work. As the first lines of the play were being spoken, the audience began to realize this is a theatrical work deserving some thoughtful and reflective conversation long after this presentation was concluded.

The theatrical approach of the play was in a non linier style utilizing dream logic. A number of the audience members noted they found this approach a bit confusing, but this is the very method dreams choose to communicate their messages to us. Utilizing the same technique produced a profound effect of drawing the attention of the audience deeper into the work as their state of confusion enticed them to engage in thoughts designed to make sense of what didn’t’.

The play is essentially about (according to the advance promotion) “a mystery that unravels to expose one family’s hidden tragedy. In a shifting dreamscape where nothing is as it seems, loyalties are tested and bonds irrevocably broken. But the nightmares of the past hold the keys to the future, and the hope for redemption.” But, it is about more than what the official description reveals. After all, too much exposition of the work would ruin the discovers it has to offer unique to each individual experiencing it.

The reading was presented very well and the acting was suburb. Even though the actors were on book (Script in hand), the level of difficulty their characters presented created challenges to their talents some have noted they seldom encounter in their theatrical experiences. It was also noted these challenges made them better actors as a result of facing them. These actors included Sara Ferguson as Catalina, Maria Picon as Prudence, John Madis as Elijah, Christopher Centrella (the play’s author) as The Father, Amy Cramer as The Mother, and Joe Bednarchik as Raven.

The presentation also included a slide show presentation of images enhancing many of the play’s elements. It was mentioned “The Good Mother” was written as a very visual play and the audience present during its reading was only receiving a portion of what it has to offer. And, what a portion it was.

Although it is a work in progress, I found the play to be very well written. The playwright demonstrates his love for language and the imagery it can create in the minds of all who hear a well crafted phrase. He also demonstrated his understanding plays are non merely written but experienced through sights and sounds. There are many new playwrights who merely write dialogue without listening to it. But, Mr. Centrella not only listened to the words he wrote, but taught them to sing. It was mentioned the play will be presented at East Stroudsburg University sometime in the future. I, for one, have every intention on seeing it. You’ll find more photographs in The Forwardian Arts Society Theater 2010 Gallery at www.myspace.com/forardian_arts.

“The Good Mother” written by Christopher Centrella was presented as part of The Shawnee Playhouse Fireside Theatre Series which was created as a forum for the artistic voices of aspiring local playwrights, actors, directors, and producers. The series serves as a supportive testing ground for new voices, a place for unique or untried approaches, and for seldom-done or little-known pieces which a commercial theatre could not normally take a chance on. In this way, Fireside hopes to provide an eclectic selection of enjoyable, thought-provoking theatrical experiences to local audiences.

The Shawnee Playhouse in Shawnee on Delaware, PA presents numerous theatrical productions along with special events like Fireside Theatre presentations. Their current productions include “The Music Man” and “Willy Wonka Junior” running until August 28th, “The Secret Garden” running until August 29th, “I Do, I Do” running until September 3rd, and “The Last of the Red Hot Lovers” running until September 5th. Their next presentation will be The Center Stage Player’s production of Neil Simon’s “Rumors” presented September 24th until October 24th. You’ll be able to read The Forwardian Arts Society Theatrical of many of these productions on my profile on Facebook, Myspace, and bloggers. Please Explore The Shawnee Playhouse Website www.theshawneeplayhouse.com or call 570-421-5093 for more information.
Posted by Unknown at 1:46 PM