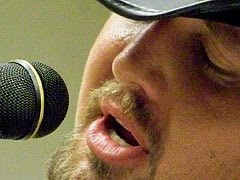 The Eastern Monroe County Library in Stroudsburg, PA presented Singer/Songwriter Jeff Workman of the band “Ridge Runner” on Friday July 23rd as part of their Bookhouse Series. A sizable gathering came out to hear this talented performer whose eclectic musical style ranged from his country roots to funk. In fact, during the performance, Jeff Workman often mentioned how this mix of musical styles has made his band known as “Funktry” Band. Regardless of its categorization, the music played Friday night proved to be a delight to all who heard it.

Jeff Workman presented some Country standards along with some original compositions. He also included medleys of song songs from other genres such as “Play The Funky Music White Boy” mix in with “Thank You for Letting me be Myself, Again,” a slowed down version of “You’re the One That I Want” from the musical “Grease,” and a very interesting version of Pink Floyd’s “Wish You Were Here” in which he inserted a verse from “Mother.” The concert also provided an opportunity for the audience to sing along. This added to the charm of the event and made it even more enjoyable. You’ll find more photographs in The Forwardian Arts Society EMPL Bookhouse 2010 Gallery at www.myspace.com/forwardian_arts.

The Eastern Monroe County Library is a Community Library serving the population residing within Monroe County, PA. They have several branches with the main one located at 1002 N. 9th. St. (route 611) in Stroudsburg, PA. Other branches include located in Tannersville, Marshalls Creek, and Brodheadsville, PA. Please Contact The Eastern Monroe County Library at 570-421-0800 or Explore their Website at www.monroepl.org for more information on their bookhouse series and all they have to offer the community.
Posted by Unknown at 11:27 AM