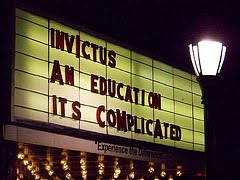 The film, “It's Complicated” was directed by Nancy Meyers whose previous work includes “Something’s Gotta Give” which, like “It’s Complicated” explores relationships between older people allowing those younger members of the audience to discover their romantic lives don’t become easier as time goes on. In fact, the film’s line uttered by the Meryl Streep character of “We’ve should have known better” rings very true for those of us past the age of 50 who should know better but really don’t. Perhaps while the mind and body ages, the heart remains youthful. This could prove to have equal amounts of favorable and unfavorable results.

“It's Complicated” romantic comedy about a couple who has been divorced for 10 years named Jane (as portrayed by Meryl Streep) and Jake (as portrayed by Alec Baldwin). She owns a successful bakery in Santa Barbara, CA while he is a successful Attorney. They have three grown children and they have a pretty good relationship. That is, until it gets too “Good.”

Although Jake is now married to a much younger woman, they begin a romantic/sexual relationship against Jane’s better judgment. Jake repeatedly (almost incessantly) expresses his affection toward Jane which leads her to question her previous decisions leading to their divorce. And, if Jake being married to the “other woman” whom she now becomes wasn’t enough of a complication, Jane meets an architect named Adam (as portrayed by Steve Martin) and begins to explore having a relationship with him. What a mess.

While the film is light and should not be taken very seriously, it does offer some serious commentary on human relationships in regards to how loneliness and second guessing ourselves when one is over can make life much more complicated than it needs to be. It seems sensible at the end of a relationship to let your ex be your ex and, while it’s ok to continue an appreciative love for those who have touched your life it would be best to love them at a distance. The further away the better. But, the characters in this film don’t follow this common sense approach and we learn what happens.

The film allows us to laugh at ourselves when we abandon our common sense in order to experience the promised joys of a romantic relationship. Sometimes these promises are kept while other times they are not. This is true in encountering people we’ve never dated in the past. But, to go back to the same well containing the waters we’ve found detrimental to our well being can prove to be a bit self defeating.

In the film, Jane goes back to her discarded well out of feelings of loneliness which are manipulated by Jake as he heap one complimentary platitude upon her after another. He doesn’t seem to do this consciously but out of a sense of some misguided self awareness of his feminine side in which leads him to wear his heart upon his sleeve. He declares himself to be more sensitive, more caring, more nurturing, more patient, and more everything a woman may want in a man except for being a man.

His self indulgence convinces him he has made a mistake and wants a redo of his life by convincing his former wife to take him back. He succeeds in seducing her in a bar with numerous drinks and utilizes that momentary lapse of reason on Jane’s part to establish an ongoing affair. This all would be malicious if it were not for the fact he honestly believes both he and Jane would be better off together.

It isn’t until the introduction of the character Adam when Jane begins to place her relationship with her ex husband into perspective. They begin to like each other. Not out of a sense of repairing mistakes from the past, but out of a desire to be with someone who makes them feel good. Their relationship develops when they begin to become able to let go of their past and explore a new future. For Jane, the image of this future allows her to see where Jake doesn’t fit into it and, eventually, Jake begins to see it, too.

In the meantime, Adam becomes hurt through this process of Jane and Jake’s revelation and decides to cool things down. However, by the end of the film, a sense of hope that a relationship between Jane and Adam can evolve as the closing credit roll. It doesn’t escape this reviewer’s sense of irony that Steve Martin who has become known for his outrageous comedic style and antics is playing a character who proves to be the most sensible and mature of the film’s principles.

In regards to “It’s Complicated” being a film exploring the complexities of the human condition in reference of our relationships, well, it’s not that. After all, it is a romantic comedy and that is all it’s meant to be. However, it does touch upon aspects of relationships and what can go awry in them enough to make it a worthwhile film to watch. And besides, it’s funny.

“It‘s Complicated” is rated R and is currently running at The Pocono Community Theater in East Stroudsburg, PA. You may call 570-421-3456 or visit their website at www.poconocommunitytheater.org for show times and dates. Most films run one week but some films may be held over for an additional week or two depending on ticket sales.

After the Friday January 1st showing of the film, The Forwardian Arts Society Gathered in The Pocono Community Theater’s Café to chat about it. The turnout was rather small but the conversation was very engaging. We invite you to join us Friday February 5th to watch a film and participate in an equally stimulating conversation. You’ll find more photographs in The Forwardian Arts Society Film and Chat Gathering 2010 Gallery at www.myspace.com/forwardian_arts.
Posted by Unknown at 9:56 PM