Another Evening with Bob Dorough 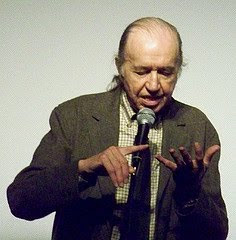 The Pocono Community Theater in East Stroudsburg, PA presented “An Evening with Bob Dorough” on Friday January 22nd. The event was an accompanying one as the great Jazz Pianist performed at the theater earlier in the month on Friday January 8th. Bob performed more of his favorite film songs as well as those he composed for the “Schoolhouse Rock“ series which appeared the ABC Television Network during the 1970s and 80s during their Saturday morning programming along with some additional songs he composed. However, those who attended this concert as well as the previous one was treated to a somewhat different show featuring songs and stories not included in the first.

One of these memorable differences was Bob’s telling of how he appeared in a Dennis Hopper film who appeared a a jazz pianist playing a song he wrote about the navy. The evening concluded with the entire audience joining Bob in the singing of some familiar tunes followed by a reception filled with wonderful culinary treats provided by The Pocono Community Theater. These treats enhanced the conversation which followed the concert which included stories when people first became aware of Bob Dorough and his music. Many spoke of how it began their interests and enjoyment of jazz while other conveyed how the depth of his compositions had an impact on their lives.

The concert served as a special thank you for those members who chose to renew their membership early to enhance the theater’s financial stability. It also served to raise funds (which included a 50/50 raffle) to enhance The Pocono Community Theater’s work in not only bringing the best of Independent and Foreign films not commonly seen in larger movie venues, but other meaningful experiences including art exhibitions, lectures, festivals, and literary readings. The Pocono Community Theater strives to be what it name indicates; a theater for the community serving its desire to enhance its life through the arts. You’ll find more photographs of the January 22nd “Evening with Bob Dorough” in The Forwardian Arts Society Pocono Community Theater 2010 Gallery.

The next event to be held at The Pocono Community Theater will be The Forwardian Arts Society Monthly Film and Chat Gathering Friday February 5th featuring an opportunity to view a film and discussing it afterwards. The film “It’s Complicated” was the film seen and discussed during for January. You’ll find our review of the film posted on our profile. Please contact us to learn how you can be a part of The Forwardian Arts Society Film and Chat Gathering.

Websites of those mentioned in this article are The Pocono Community Theater at www.poconocommunitytheater.org and Bob Dorough at www.bobdorough.com.

One further thought. I know many of you who have enjoyed the offerings of The Pocono Community Theater has a great deal to be thankful for. Please feel free to share your comments of appreciation with me as I'm sure everyone would like to learn of them.
Posted by Unknown at 12:54 PM