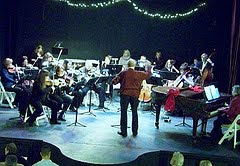 The Shawnee Playhouse in Shawnee on Delaware, PA presented their 31st Annual Messiah Sing-In featuring a Community Concert on Tuesday December 22nd performing G. F. Handel’s 1741 Sacred Oratorio entitled, “Messiah.” The annual event invites the community to become the composition’s chorus while area musicians and soloist provide the musical portions of the piece. The event was proceeded by a special “Messiah Warm Up” event held at the neighboring Shawnee Gallery which offered an opportunity for those planning to sing along to stretch their vocal cords while enjoying the artistry around them as they partake of a “Snog of Nog.”

For several, the evening began with a delightful visitation to The Shawnee Gallery which housed a variety of arts and crafts entreating all who have seen them to become part of their holiday shopping. This includes their current exhibition featuring the works of Bill Hobbs and continues until January 4th. The conversation was as intriguing as the pieces which enhanced the warm atmosphere of the gallery. The entire experience served to be a perfect preparation to the wonderful choral experience yet to come.

Upon entering The Shawnee Playhouse, one is immediately struck by holiday adornments of the theatre. This sets a joyous mood not only contributing to the community concert but lingers quite some time afterwards. The seats had signs designating where people with a particular vocal range such as Bass, Tenor, Alto, or Soprano could sit with similar voices. There were also seats available upon the balcony for those who came to merely observe the musical treat.

The entire evening proved to be a wonderful avenue in which one could travel alongside the fullness of the season. The many walking through the theatre at the concert’s conclusion were visibly touched by the music and song with fond thoughts of next year’s community gathering already filling their hearts. The next presentation to be held January 9th - 17th at The Shawnee Playhouse featuring their production entitled, “Moments” consisting of several original plays written by Rob Howell. Please Contact The Shawnee Playhouse at 570-421-5093 for more information. For all the workshops, exhibits, and other special events The Shawnee Gallery offers during its 2010 season, place contact them at 570-420-9404 for more information. You find more photographs in The Forwardian Arts Society Visual Arts 2009 and Music 2009 Gallery on www.mysapce.com/forwardian_arts.