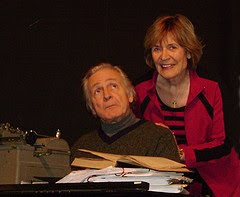 The Shawnee Playhouse in Shawnee on the Delaware, PA presented The Worthington Players production of “The Housekeeper” by James Prideaux. The play centers around a writer who thinks he’s a good one named “Manley Carstairs” (as portrayed by Robert Hughes) hires a woman named “Annie Dankworth” (as portrayed by Suzanne Ford) who thinks she’s much more refined than she is as his housekeeper. The two characters seem to be completely opposite of one another but soon develop a relationship when their commonalities are discovered in this amusing comedy.

However, the opening night performance of this production has a number of problems that goes beyond those associated with what is commonly referred to as the “opening night jitters.” The timing of the play was seemed to be way off as the blocking became stagnant in many areas and the actors seemed to be struggle to remember their lines. Although the actors were well cast in their roles and interpreted their character well, it seems to this reviewer the play needed more rehearsal time and it is hoped the remainder of its will remedy some of what transpired.

The production’s failings comes as a surprise to this reviewer considering the caliber of the director, Midge McClosky. Her work as a director and actress in previous Shawnee Playhouse productions was exemplary and this production of “The Housekeeper” would have been far more funnier if she utilized those same talents here. Instead, while there was laughter in the audience at the genuinely funny lines and moments, there was also a tense quietness while watching the actors help each other with their forgotten lines.

The Worthington Players production of “The Housekeeper” by James Prideaux was Directed by Midge McClosky (who also serves as the Executive Director of The Shawnee Playhouse) and Stage Managed by Kevin E. Hillman. The Light and Sound Operator was Kyle Mahaney and the Spotylight Operator was LeahAnne Rosengarten. The producers are Ginny and Charlie Kirkwood. Group Sales of their productions are handled by Mary Horn (who also served as a member of the Box Office Staff) as assisted by Becky Haskell while The Shawnee Playhouse publicity is handled by Amy Cramer.

This production of “The Housekeeper” by James Prideaux will continue its run at The Shawnee Playhouse in Shawnee on the Delaware, PA until January 31st and, although it is hoped the flaws of this production will repair themselves as the actors become more accustomed to their lines, it‘s unfortunate this reviewer can‘t recommend seeing this play as it is at present. The next Shawnee Playhouse presentations will be “The Three Tenors” on Sunday January 31st, “Love in the Time of War” February 6th - 14th, “Lovers, Winners, and Losers” on Sunday February 14th, “The Seafarer” February 19th - 21st, and The Shawnee Playhouse Annual Staged Readings February 26th - 28th. Those who enjoy the Passionate Art Lover level of membership in The Forwardian Arts Society are offered a $3.00 discount off the admission fee of The Shawnee Playhouse Productions (excluding Children Theatrical Productions and those presented by non Shawnee Production Companies). Please contact The Shawnee Playhouse at 570-421-5093 or Explore their website at www.theshawneeplayhouse.com for more information and to reserve your ticket.

Photographs provided by The Shawnee Playhouse and depicts Suzanne Ford and Robert Hughes from their production of “The Housekeeper.”
Posted by Unknown at 11:34 AM

Please, Paul, if you're going to bash a play, at least use some decent grammar; This review just makes you look uneducated, which consequently, makes it extremely difficult to take anything you've said seriously.