Reeds Among The ArtMusic 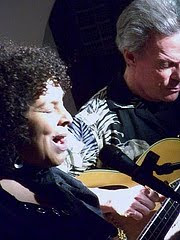 The ArtMusic Coffeehouse in East Stroudsburg, PA presented Jazz Duo Spencer and Nancy Reed on Friday January 29th as part of their monthly house concert series. A sizable gathering came together into the welcoming home of Don and Jan Slepian to enjoy the smooth sounds of the featured guest which was preceded by some entrancing music composed by Don himself. This originally was followed by the familiar sounds many fans of Nancy and Spencer have embraced throughout the years and tonight was no exception.

In an atmosphere of delightful conversations, entreating décor which included a number of carousel horses hanging from the ceiling, and an abundance of food provided by the Slepians and brought in by those who attended the event, an excited calmness settled over the gathering as they began to absorb all that was offered. The ArtMusic Coffeehouse provides the Slepian’s an opportunity to open their home to the public to share their musical friends with the community. The warmth and wealth of their offerings never fail to enrich the many who come to partake of the welcoming experiences. A loving cord is touched in each soul and continues its vibrations long after the concerts are completed.

After taking few months off due to an overseas tour Don will be performing in along with Jan Directing The Worthington Players Production of ‘The Importance of Being Ernest” at The Shawnee Playhouse in Shawnee on Delaware, PA which will run March 27th - April 11th, The ArtMusic Coffeehouse will return on Friday April 16th with The Jack Stafford Foundation featuring Jack Stafford beginning at 8pm. Reservations are requested as seating is limited. Please Contact The ArtMusic Coffeehouse at 570-476-6307 for more information. You’ll find more photographs in The Forwardian Arts Society ArtMusic Coffeehouse Series 2010 Gallery at www.myspace.com/forwardian_arts.

Websites of those mentioned in this article are The ArtMusic Coffeehouse at www.artmusiccoffeehouse.com, Spencer and Nancy Reed at www.reedjazz.com, The Jack Stafford Foundation and www.jackstafford.co.uk, and The Shawnee Playhouse at www.theshawneeplayhouse.com.
Posted by Unknown at 3:49 PM