The Poetry of the River 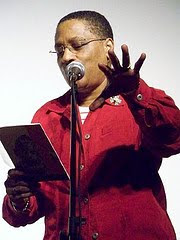 The Pocono Community Theater in East Stroudsburg, PA held an afternoon filled with poetry and music to honor The Delaware River on Saturday December 19th as part of the ongoing 7th Annual Inter-Disciplinary Art Show entitled, “The Riv-7 The Delaware River–A Big Picture.” The exhibit began on Saturday November 4th presenting the works depicting aspects of The Delaware River by numerous painters, photographers, and other visual artist including Filmmaker Nick Patrick whose “Ghost Waters” detailed the story of the abandoned Tock’s Island Dam Project and how it affected the local population. The poetry and music presented on the 19th continued this tribute to the mighty river which concludes January 10th.

A rather small number of people were in attendance which may be accounted for by news of an impending snow storm. However, the poetry and music presented proved to overpower the approaching storm and any fears it may have accumulated among those who did attend. The spoken words moved the listener while the music presented moved its hearer in amusing and thoughtful ways.

The event began with some welcoming words by the event coordinator Rod Cameron which was soon followed by a piano recital of some well played classical pieces performed by Zachary Wynne. The mood set by his renderings opened the mind and heart to the poetic words soon to follow. This began with a reading by poet Dr. Juanita Kirton which included several specially written poems honoring The Delaware River along with selections from her recently published first book entitled, “Inner Journey.”

The afternoon continued with a solo performance by Eric Hanston of the band Dewey Decimal and the System whose powerful lyrics shook the audience with their rhythmic deliveries set to a hard rock country beat. Even if one desired to do so, none could Dam that river of emotions expressed in his songs as they kept braking through. This performance was followed by my reading some poetry written by me.

A solo performance by Darrin Bradbury of the band Big Wilson River followed which not only presented some very good tunes but gave insight to the creative process as many of the songs were so new they gave the feeling they were being written at the very moment they were being sung. This, to say the least, was a very interesting experience and inspired more appreciation to the skill and art of song writing. This was followed by some readings presented by Rod Cameron of poets who could not be in attendance. Their work was varied except for the fact they all related to The Delaware River and they were of a very high quality.

Alicia Johnson ended the musical performances with her uncanny performance that never fails to reach into each listener’s soul to convey the emotions she utters through each song. Some songs were originally written by her while others were created by better known writers. However, every song she played sounded as if they were her own as she placed her unique touch upon every note and lyric. Even her rendition of the classic “Stormy Weather” gave many to pause wondering if she really wrote it or not. This remarkable performance was followed by another reading by Dr. Juanita Kirton whose words proved to be a wonderful way of brining the afternoon to a full circle closure creating a feeling as one imagines a river experiences as it flows into the yet mightier ocean.

Throughout much of the event, guitarist Fritz Jackman provided musical accompaniment for many of the musicians and poets on his Bass Guitar. This enhanced the performances by creating more audio substance to the songs and echoing the sentiments expressed in each poem as they moved beyond the words uttered. Mr. Jackman’s contribution to the afternoon was well appreciated as they explore another dimension to all that was presented.

As mentioned earlier, the ongoing 7th Annual Inter-Disciplinary Art Show entitled, “The Riv-7 The Delaware River–A Big Picture” continues until January 10th and can be seen at The Pocono Community Theater in East Stroudsburg, PA. This can be done by visiting the theater during their regular hours or by exploring the many images while waiting for a film to begin. Please contact The Pocono Community Theater at 570-421-3456 for more information about the exhibition and all they have to offer. You’ll find more photographs at The Forwardian Arts Society Literary Arts 2009 Gallery at www.myspace.com/forwardian_arts.

The websites of those mentioned in the article are The Pocono Community Theater at www.poconocommunitytheater.org, The Film “Ghost Waters” at www.ghostwaters.com, Eric Hanston of Dewey Decimal and the System at www.myspace.com/deweydecimalplaysmusic, and Alicia Johnson at www.myspace.com/aliciajohnsonmusic
Posted by Unknown at 3:28 PM