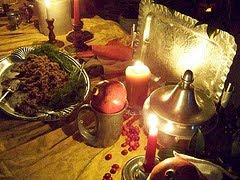 St. Paul’s Lutheran Church in Tannersville, PA presented the final day of their Annual Three day Boar’s Head Festival on Sunday December 13th. The festival is based upon the information obtained from a booklet written by Paul Kramp entitled, “Twelfth Night, Yesterday, and Today” which details the pageants which took place throughout Medieval England to celebrate the Vigil of Epiphany. The Boar was thought to be the King of the English Forests and this festival is held as it is associated with the arrival of the biblical three kings who came to bestow gifts upon Joshua, Son of Joseph (aka Jesus the Christ) sometime after his birth which is commemorated on December 25th.

The festival at St. Paul’s Lutheran Church had a variety of activities which both gave those attending a feeling for the time the event was initiated as well as a foretaste of the musical experience yet to come. In it’s fellowship hall, there were displays of foods surrounded by candlelight featuring plentiful supplies of cheese, nuts, breads, and (in respects to the Boar) some pork. There were many church members adorned in Medieval garb to greet visitors to the festival which included some wenches serving up some “Wassel” which supposedly was the period’s name hot apple cider.

Before arriving in the Church’s Sanctuary, a bevy of musical tones by the St. Paul’s Bell Choir led by Nancy Joy Kotch filled the passage ways. Their deceptively simple chimes echoed throughout the mind and hearts of all who were touched by their song. While many lingered to hear more, many more moved into the church to take their place to prepare for the spectacle which awaited them.

Pipers from The City of Bethlehem Bagpipe Band led by James B. Ruhf opened the main festivities with a rousing rendition of a traditional Piper Ode. It twas indeed a glorious beginning it was as dancers soon joined them for a highland fling complete with the showing of the blade and other traditions bearing the signs of the Scottish isles. This was later followed by entrance of the lady and lord of the Manor along with the Noblemen and women who came to join them in the feast. The event continued with a number of processions beginning with that of The Boar’s Head, the Swan and Peacock, the Jester’s, Yule Log, Angels, the Holy Family (Mary, Jesus, and Joseph), The Magi (aka Three Kings), and St. Nicholas. The entire event was an enjoyable one presenting a little known history of Church Tradition of the time period.

Those who participated in the event included Rev. Dr. Thomas E. Richards, Jr. who is the Pastor of St. Paul’s Lutheran Church, Larry and Bertie Kishbaugh who portrayed the Lord and Lady of the Manor with the Noblemen and Women portrayed by Bill Dinterman, Sarah Glenn, Mike and Linda Diver, Steve and Tammy Manhart, Kim Robertson-Holzman, Joe Washko, and Bob and Cathy Wentz. Their serving wench was Brooke Schmidt. Mary was portrayed by Nicole Barron while Joseph was portrayed by Derek Garis. Saint Nicholas was portrayed by Bruce Orlowski. The Event’s music was directed by Bob Riday as assisted by Kelly Foley and Gary Raish. Those lending their voices to the choir included Jane Asher, Anna Busteed, Will Eldredge, Lori Flanagan, Tassy Gilbert, and Arline M. Smeltz.

St. Paul’s Lutheran Church’s Annual Three day Boar’s Head Festival is traditionally held the second week of December in honor of the modern Christmas season. Please Contact St. Paul’s Lutheran Church at 570-629-1992 for more information on the festival and what they have to offer the community. You’ll find more photographs in The Forwardian Arts Society Boar’s Head Festival 2009 Gallery at www.myspace.com/forwardian_arts.

The websites of those mentioned in the article are St. Paul’s Lutheran Church at www.stpaultannersvillepa.org and James B. Ruhf of The City of Bethlehem Bagpipe Band at www.bagpipingbyjames.com.
Posted by Unknown at 3:02 PM