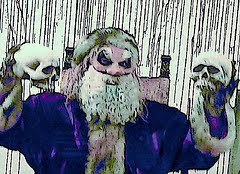 The Sherman Theatre in Stroudsburg, PA hosted another installment of their Severed Sinema Series on Thursday December 10th presenting the films, “Don't Open til Christmas” and “Christmas Evil” along with an opportunity a picture taken with an Evil Santa with special effects created by Shane Izykowski. In addition to the films, the band “Mega Savant” performed between the films. It was a fun and frightful Christmas making the season filled with remaining holiday shopping seem a bit less scary.

The first film shown was “Don't Open Till Christmas” which was made in 1984 and directed by Edmund Purdom. It was as cheesy as cheesy can be. In fact, if you looked up cheesy films in a dictionary, you may just find a picture taken from this film as an illustration. It was about a murderer running loose through the streets of London hunting down men dressed as Santa and killing them. The film worked on weird, misplaced logic and little sense in continuity connecting scenes together.

But, it was, as all films in the Severed Sinema Series, a lot of fun. In fact, it’s lack of cohesiveness was what made it great in the annals of really bad films. “Don't Open Till Christmas” didn’t quite make the distinction of being so bad it was good. But, it came pretty darn close.

During the intermission, Mega Savant performed providing a varied interlude for those who experienced them. Their repertoire ranged from Classic heavy metal and acid rock to jazz and funk. Although their audience were small in number, the energy of their songs enhanced the evening’s event. Mega Savant is an Indie Band from Milford, PA whose influences include that of Frank Zappa and consists of "Francis" on Drums, "Jack" on Saxophone, "Mike" on bass, and "Tom" on Guitar.

The second film to be show was “Christmas Evil” which is also known as “You Better Watch Out” and “Terror in Toyland.” It was made in 1980 and was directed by Lewis Jackson. Although I can’t say this was the best film ever made, it proved to be heads and shoulders about “Don't Open Till Christmas.” In fact, “Christmas Evil” has gained the status of being a cult classic with a list of fans to include film maker John Waters.

The film is about a man who, as a child, has seen his mother sexually groping Santa, who was actually his father, during Christmas. He grows up to work in a toy factory and secretly spies on his neighbors making a list of who is naughty or nice. After an incident at the office Christmas party, he decides to dress up like Santa, take the company’s toys, and share them with the good people he encounters. But, when he encounters some baddies, oh oh oh.

The film is interesting as it communicates through its narrative on several levels. One is that of a straight forward slasher film although there are few victims and primary person getting slashed is the protagonist himself. Another level the film touches upon the psychosis of the protagonist as it explores the make up of his personality and how his childhood experiences come into play with his adult behavior. What is very interesting about this aspect of the film is that the protagonist comes across as a pretty stable person with no obvious indicators he’s about to go out and kill anyone. This later leads to the audience wondering if he is really evil at all in spite of the murders he commits.

In fact, it seems those who are in pursuit of him may be considered evil. There is one amusing scene where the towns people are chasing the protagonist with torches just as they often do in Frankenstein films. Their relentless persecution stems from their fear and misunderstanding which pulls into our society’s response to a figure pretty much by that represented by Santa Claus. This is further complicated by his apparent ability to induce it to snow when he heartily proclaims, “Ho Ho Ho, Merry Christmas” and with the final scene in which he drives his van off a cliff and it magically flies into the evening moonlight sky. What an ending.

Throughout the evening, Evil Santa was on hand for those who were brave enough to sit upon his lap to have their pictures taken by his special effect creator Shane Izykowski. His helpers were on hand with body bags for those who were among his victims (ok, I made that part up). It was a great deal of fun and added a wonderfully gruesome dimension to the holiday season. Perhaps this will become a new tradition replacing a shopping malls Santa with an Evil one in which young children will leave these capitalistic Meccas as traumatized as their shopoholic parents and keep many psychiatrists well employed for years to come. You’ll find more photographs in The Forwardian Arts Society Film 2009 Gallery at www.myspace.com/forwardian_arts.

The next installment of Severed Sinema Series will be at The Sherman Theatre in Stroudsburg, PA Friday January 29th beginning at 7pm in celebration of their fist anniversary. The special event will feature the films “The Bloody Ape” and “Night of the Demon” which will include a special live appearance of Keith Crocker who directed “The Bloody Ape” along with the Bloody Ape himself. The next events taking place at The Sherman Theatre are David Archuleta’s “Christmas from the Heart Tour” on Friday December 18th at 7:30pm and Christmas Jam in the Poconos All-Stars on Saturday December 19th featuring Liquid Sunshine and Juggling Sunsalong with special appearances by Len Mooney of The Roamin' Gabriels, Erin McClelland, Zac Lawless of Valley of the Giants, Mike Papile and Joe Lynch of Shaker Jones, Ellen Ryan of Ryans Revenge, Ryan Leaver of the Dirk Quinn band, and more. Please Contact The Sherman Theatre at 570-420-2808 for more information.