The Night of the Deflowered Laughter 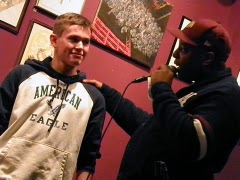 A chilled breeze touched the streets of Stroudsburg, PA as Kiss This Entertainment presented another installment of their weekly Comedy and Improv Open Mic on Wednesday April 23rd at The Sherman Theater’s Living Room. A sizable number of people populated the venue which included several students from local high schools who wanted to test their comedic skills. They were joined by a number of new comers to the event who, in spite of their post scholastic age, sought to deflower their comedic urgings and to share their gifts before the eagerly awaiting audience. There were also a number of performers who returned to the venue to share their talents with the gathering once again.

The evening’s master of ceremonies, Don Harlem took the stage to welcome those who came out to the show. He then began to set the mood for the evening by working the audience into his routine while talking about the experiences he had during the week including being suspended from his place of employment. It was after these stories did Mr. Harlem introduce the first comic to perform during the course of the evening.

Sixteen year old Jacob Sullivan (aka The Sexinator) took to the stage to share the reasons why he’s still a virgin. After these fascinating and humorous revelations, Mr. Harlem returned to the stage where upon he was challenged to a roast by a member of the audience whose identity this writer is unable to recall. The melee of words went back and forth between the two men until it ended with no clear winner decided upon. This was followed by the introduction of another high school student named, “Donato Salisbury” who shared his experiences in school and what it’s like to tell his friends what sex is like.

Mr. Salisbury was followed by another high schooler named, “Tristion O Neal” who shared a story involving dead rabbits. He was followed by his class mate named, “Garret Crift” who shared his thoughts on the differing qualities of parents who are either overprotective or under-protective. Mr. Crift was the last of high school students to perform and was followed by Joseph Christian whose poetic words relating to the concept of Heaven moved the audience to thoughtful contemplation. He was followed by Chas whose comic explorations divined from his book of humorous anecdotes delighted the gathering with dreams about aliens and the use of the “N” word.

Chas was followed by Comedienne Kristi Curtis whose comedic style included subtle allusions to societal nuances which she sprinkled ever so lightly into her routine encouraging those who listened to her words to become very astute so they could thoroughly absorb her almost subliminal observations. The topic she explored varied widely and included Wal-Mart, Craig’s Lists, Kids, Former Super Models Selling Furniture, and guys she dates. Ms. Curtis was followed on stage by Paul (yeah that’s me) who attempted a new approach to presenting some humor to the crowd but didn’t do as well as he had hoped. He (that is… me) was followed by a woman named, “Yanna” who shared an interactive set with the series’ host, Don Harlem, until a break initiated by a disagreement between audience members ensued.

The break concluded with the announcement Brad would be the final performer upon which he took to the stage and shared a number of his thoughts for the benefit of the crowd. It was after Brad brought a completion to his words did Mr. Harlem thank all who participated in the evening’s performances and bade the audience farewell while inviting those who were present to return for another adventure the following week. You’ll be able to find more photographs taken during the Wednesday April 23rd Kiss This Entertainment’s Comedy and Improv Open Mic in The Living Room 2014 Gallery Part 2 at www.facebook.com/media/set/?set=a.10152275669355421.1073741879.636000420&type=1.

Besides housing the Kiss This Entertainment’s weekly Comedy and Improv Open Mic event, The Sherman Theater’s Living Room in Stroudsburg, PA is currently presenting an exhibition featuring the work of Leonard Boone, Ashley Fontones, Eric Goins, and Ben Schwartz. The exhibition will continue to be on display until April 30th. The Sherman Theater’s Living Room also holds a weekly Open Mic Nite Series www.facebook.com/OpenMicAtTheLivingRoom?ref=ts&fref=ts which occurs every Sunday Evening beginning at 7pm.

The Sherman Theater’s The Living Room is located on Main Street in Stroudsburg, PA. The venue is a non-profit artspace and community hub featuring live music, performance, and other events in an intimate setting at affordable prices. Please Explore The Living Room Facebook Page at www.facebook.com/pages/The-Living-Room/123978921059378 for more information on The Living Room, all they have to offer, and how to be a part of it all.
Posted by Unknown at 1:53 PM