The First Laughs of April 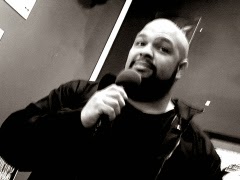 Kiss This Entertainment started the Month of April off with a laugh on Wednesday April 2nd as they presented another installment of their weekly Comedy and Improv Open Mic at The Sherman Theater’s Living Room in Stroudsburg, PA. A welcoming assortment of snacks along with a friendly bar tender who has become a mainstay fixture of the event named, Mike, greeted those who came to the venue to either share their talents or to indulge in the entertaining endeavors of others. A modest number of people eventually filled the space with many greetings shared among new and well established friends alike until it was time for the festivities to begin.

The evening’s master of ceremonies, Don Harlem took the stage to welcome those who came out to the show. He then set the mood for the evening by humorously reflecting on the properties of certain diets, the feces they produce, and how women should come with “Carfax” like documentation. While the effects of these amusing observations still permeated throughout the gathering, Mr. Harlem introduced the first comic for the evening.

As Chas stood before the microphone, he remarked how his first sharing before the group several weeks ago was his desire to obtain a joint and how everyone thought he was joking. After this humorous revelation, he went onto exploring the nature of some medical conditions which led to a Hip Hop performance which enlivened the crowd. Chas was followed by a comedian named, “Bill” who, in spite of appearing too young to be associated with such statements, began sharing his observations on “what’s wrong with these kids today.” However, his observations on the younger generation evolved around how their choices in drugs have throughout the years reflected a dissatisfaction and disrespect for established narcotics like heroine and cocaine in favor of new fangled drugs like those derived from bath salts. This observation gave the generational lamentable cliché a nice twist to it making his routine all the more thoughtfully amusing.

Bill was followed to the stage by Mike the bartender who recited a poem that detailed various sexual approaches and the adventures related to them. The work inspired many to focus so intently upon its meaning in lieu of everything else. In fact, there was one point where a member of the audience dropped her drink to the floor and unconsciously picked up the fallen ice in order to devour it. This poetic interlude was followed by the appearance of Brad to the stage who shared a number of his adventures with the crowd as they listened with a sense of wonderment. Brad was followed by a comedian named Tracy who shared a series of humorous stories about becoming older, the art (and dangers) of shaving one’s head, some childhood memories, and how best to utilize a $3000.00 an hour prostitute.

Tracy was followed to the stage by Lakisha Williams who explored a number of topics with the audience including those relating to parenting.  She was followed on stage by a comedian named, “Joe” who spoke on the word “homophobia” and how it seemed to be overly used. He also shared his childhood adventures emanating from his discovery of masturbation and how a jar of Vapor rub played a disastrous part in his early experimentations. Joe was followed to the stage by guitarist Justin O’Neil Rosario who is well known among those who frequent the venue during it’s weekly Open Mic Nites on Sunday Evening. Justin will be a part of the Sunday evening’s Open Mic All Star Show which is scheduled for Friday April 25th. Although he experienced some difficulties during his set, Justin’s performance faithfully reflected the outstanding qualities many have come to enjoy during his earlier performances with the additional introductions he gave in this venue enhancing the substance of the compositions considerably.

As Justin completed his set, Mike the Bartender came back to the stage to share another poem with the gathering. The poem he presented this time around proved to be a serious piece relating to the abuse and neglect one can be damaged by during one’s childhood. During the course of the evening’s and previous Comedy and Improv Open Mic events, a number of comedians included stories of disciplining children in ways some would be considered abusive. While comedy can serve society by allowing the tragedy of often psychologically traumatic situations or occurrences to be recognized and addressed through its humorous insulative anecdotes, the poem reminded many there are some topics not to be made trite of or to be showcased as if they were preferred modes of behavior.

The evening ended as Don Harlem came to the stage one final time to thank the performers and all who came to experience them for making it a memorable night. It was at this point did many share their farewells with one another along with their eagerness to attend next week’s event. You’ll be able to find more photographs taken during the Wednesday April 2nd Kiss This Entertainment’s Comedy and Improv Open Mic in The Living Room 2014 Gallery Part 2 at www.facebook.com/media/set/?set=a.10152275669355421.1073741879.636000420&type=1.

The Sherman Theater’s The Living Room is located on Main Street in Stroudsburg, PA. The venue is a non-profit artspace and community hub featuring live music, performance, and other events in an intimate setting at affordable prices. Please Explore The Living Room Facebook Page at www.facebook.com/pages/The-Living-Room/123978921059378 for more information on The Living Room, all they have to offer, and how to be a part of it all.
Posted by Unknown at 12:44 PM