A Festive Day in Stroudsburg 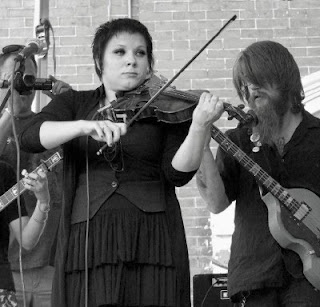 On a blistery late s Summer Day, the town of Stroudsburg, PA came alive Saturday September 4th with it’s 3rd Annual event titled, “Stroudfest 2010.” The day was filled with music, art, dance, and the frivolity that made spending the day in town a very enjoyable one. It proved to be a great opportunity for those who have lived in the area for a number of years to meet the friends they made in that time as well as those who are new to meet others with stories to tell.

The main attraction of the festival were the many stages which were set up throughout the town. Although it didn’t take much traveling though the town to enjoy the entertainment presented on each of the stages, they were strategically situated as the sounds emanating from one performance didn’t interfere with the enjoyment of another’s. The stages were also spaced far enough apart so people who strolled and chatted with one another could speak in a normal tone of voice so all the nuances of the conversation could be enjoyed. I personally didn’t have a chance to see most of the musical performances as I was delightfully engaged in numerous conversations. But, the ones I did manage to experience were well worth while taking in.

There were numerous Artists and Artisans who lined the streets of Stroudsburg offering their talents and wares. The work I’ve seen was varied and plentiful ranging from sparkling jewelry dazzling the imagination to sublime paintings gently touching the divine recesses of the soul. I was fortunate enough to have an opportunity to chat with some of these vendors and found myself enriched by the experience. Their ranks included a portrait artist, David Ohlerking, who captured passerbys on canvas as they stood before him.

There were also many businesses and organizations who were present in order to share what they were about with the public. I also found chatting with them an enlightening experience as I was able to learn more about what they had to offer. Some of what I learned was quite surprising as I didn’t expect some vendors of this type to be avid lovers of the arts. But, with the years of experiences I’ve had, I guess I shouldn’t have been.

Among the Artists, Vendors, and Groups I met during Stroudfest 2010 and here is a small representation of who they are. They included “Katie’s Kreations,” The Liquid Martini Bar, The Pink Ribbon Boutique, “Jewelry by Mindy Davies,” Karen DeMatteo of Silpada Jewelry, “SunSational Shades,” “Beaded Expressions,” “Maiden Hope,” Stone Row Studio,” “Rusty Transformations,” Artist Terry McCabe, “Primitive Nature: Handcrafted Jewelry,” “The Animal Welfare Society of Monroe County,” “Roney Creations,” Sweet Illusions,” “The Mud Place Pottery,” “AQB Mosaics,” Wood Artist Mariana Russo, and there was an Artists Reception for an exhibit being held in The PoconoArts Council Studio Gallery featuring the works of Marcos Oksenhendler, Andrea Rimberg, and Jean Sayer which runs throughout the month of September. As mentioned earlier, there were so many artists, artisans, businesses, and groups attending the festival that I’m sure there are well deserved apologies for not including them on the list I presented. However, if any of you reading this article are not mentioned in it, please feel free to leave a comment so you’ll be properly recognized.

Stroudfest 2010 is an annual festival showcasing the creative and business community centralized in Stroudsburg, PA as well as those located throughout the entire Monroe County, PA Region. Information on the festival can be gained through exploring The Sherman Theater Website at www.shermantheatre.com or by calling them at 570-420-2808. It was a great day and I got to meet up with many of my friends which made it all the more enjoyable. I hope to see you next year.

During Stroudfest 2010, The Forwardian Arts Society held a Photography Lovers’ Gathering. Although no one officially came to be a part of the gathering, it was a wonderful day to take photographs of all the delightful offerings the festival presented. This included the people who came to enjoy the day as well. It was a lot of fun. You’ll find more photographs in The Forwardian Arts Society Stroudfest 2010 and Photography Lovers’ 2010 Galleries at www.myspace.com/forwardian_arts.

The Forwardian Arts Society next scheduled Gatherings and Events will be held at The Cheeky Monkey Coffeehouse in Stroudsburg, PA. They will be a Music Lovers’ Gathering on Thursday September 16th at 6pm, a Literary Lovers’ Gathering on Thursday September 23rd at 6pm, a Film Lovers‘ Gathering featuring the film, “Zardoz“ on Friday October 1st at 7pm, an Artists’ Reception on Saturday October 2nd showcasing artists and photographers who entered their work in our first juried exhibition titled, “Cover to Cover,” and a Visual Art Lovers’ Gathering on Sunday October 3rd. The Forwardian Arts Society will also present the third of their Festival Series titled, “ArtSmash3 of the Poconos: ArtSmash meets PoconoArts Squared” on Saturday September 25th which is held in conjunction with The PoconoArts Council event. More information on The PoconoArts Council can be gained by exploring their website at www.poconoarts.org or by calling them at 570-476-4460

The Forwardian Arts Society is a fellowship for people who love the arts seeking to enhance the creative community by encouraging those interested in the arts to go forward toward their dreams, by supporting those groups and individuals who are manifesting their dreams through performances and/or presentations, and by loving them and all they do. Please Explore The Forwardian Arts Society Website at www.theforwardianartssociety.com or call 570-269-3348 for more information about the fellowship and all it has to offer.
Posted by Unknown at 12:23 PM