Beastly Dreams at The Sherman 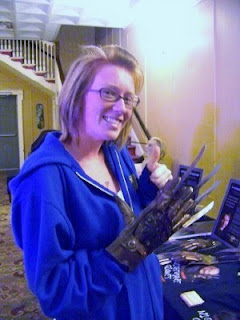 The Sherman Theater in Stroudsburg, PA presented another installment in their Severed Sinema Series hosted by Earl Kess on Thursday September 23rd titled, “Never Sleep Again.” The films featured were “Nightmares in a Damaged Brain” (aka Nightmare and Blood Splash) and “A Nightmare in Elm St.” A display of the gloves the later film’s character Fred (aka Freddie) Kruger wore was provided by the series special guest Anders Eriksen. The Blues/Punk band “Beasts of Traal” performed between the films.

The evening began with the screening of the 1981 film directed by Romano Scavolini titled, “Nightmares in a Damaged Brain” (aka Nightmare and Blood Splash). To say this was a cheesy film would cause many such films to take issue in being placed in the same category. It was a mess. But, this is exactly why it was so much fun to watch.

It’s about a man named George Tatum who is seriously warped and potentially homicidal. Due to some early release program which is never quite explained he is left wandering the streets. The medication he was given so he could be discharged from the institution he was in aren’t working and he winds up killing a few people. This is until he arrives at a family’s home and is killed by one of the kids. I suppose family life does have a tendency of doing that.

The narrative style of the film was quite something to experience. It seemed much of film was edited together in the order the scenes were shot leaving it with little cohesive continuality. Many of the actresses who appeared in the film to be killed had very little to do with the overall plot. It seemed they were there to replace others because they couldn’t get off work that day. In other words, a lot of what went on in the film didn’t make sense. Still. Like I mentioned earlier, it was fun to watch.

Once the film was completed those who attended the screening were able to venture out into The Theater’s Lobby to visit Anders Eriksen and his “Nightmare Gloves.” Many had fun trying them on and striking poses for their friends’ camera phones. They were a very impressive collection with each containing a certain artistic quality. It was all very cool.

It was during this time “Beasts of Traal” took the stage and several of those in the Lobby returned to the auditorium. Although the band only consisted of Will Sovinski on Guitar and Corry Scott on Drums, the sound they made gave the impression there were more musicians on stage. And when I say sound, I don’t mean the noise. Their songs had a subtle quality to them which the musicians maintained even while honoring the hard presentation Punk Rock has become known for. This may have been because of the introduction of the musical styling found in the Blues genre which is a very unique element to find in a Punk Rock Band. It all led to an interesting and enjoyable performance.

The second film which was the original 1984 “A Nightmare on Elm Street” directed and written by horror film icon Wes Craven featuring Robert Englund as “Freddy” Krugar and Johnny Depp in his feature film debut began soon after “Beasts of Traal” left the stage. The lasting influences of this classic horror film can be seen in the genre of works being presented up to and including the present day. Wes Craven utilized all the bells and whistles in the spooky movie handbook while inventing some of his own. It won critical acclaim at the time of its release for its originality and filmmaking qualities and is still looked upon with horrified fondness.

When I first saw it during its theatrical release, I found most horror films laughable at best. But, “A Nightmare on Elm Street” was the first film that truly scared me since I was seven. The subsequent sequels, television series, crossover with the inferior “Friday the 13th”, and the remake I don’t really want to see has profoundly diluted much of the “Holy Sh**” quality of the film for me. So, it was with great pleasure the opportunity to see the original film in a theater setting as it allowed me to forget about all that came afterwards and enjoy it as if seeing it for the very first time.

For those of you who don’t know, a child killer named “Freddie Krueger” invades the dreams of the children of those who killed him a number of years prior. In their dreams, he hunts them down and kills them. They never wake up as their deaths become reality in very gruesome manners. One of his potential victims devise a plan on destroying Freddie and succeeds in doing so but not without allowing the groundwork for a sequel to be developed. But, in spite of this contrived ending, the film holds much of the horrifying qualities that made it so scary in 1984 and I found myself going through some contortions at certain scenes. You’ll find more photographs of the event in The Forwardian Arts Society Severed Sinema 2010 Gallery at www,myspace.com/forwardian_arts.

In a special collaboration between The Sherman Theatre and The Pocono Community Theater in East Stroudsburg, PA a special Severed Sinema Series will be presented Sunday Evenings at 7pm beginning October 3rd with the film titled, “Burial Ground.” All the films will be shown in their 35mm format and will continue until Sunday October 31st with the screening of the film, “Zombie.” The next screening in the series to be seen at The Sherman Theater will be their “Halloween Hell Night” event on Friday October 29th beginning at 7pm featuring the films, “The Omen,” “House by the Cemetery,” and a late night screening of “Black Ribbon” featuring a visit by its director John Orrichio. The evening will also feature art by Primo Cardinalli and music by “Methodical.” Please Contact The Sherman Theatre at 570-420-2808 or Explore their Website at www.shermantheatre.com and/or Contact The Pocono Community Theater at 570-421-3456 or Explore their Website at www.poconocommunitytheater.org for more information.
Posted by Unknown at 1:16 PM