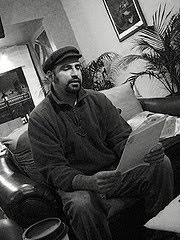 The Cheeky Monkey Coffeehouse in Stroudsburg, PA hosted the weekly titled, “Just Say It: A Spoken Word Symposium” facilitated by Joe Landolfa and Emmit Derrick on Thursday September 16th. The event has become known as a venue in which poetry can be heard and a great deal of topics explored through the conversations which occur. This week’s gathering proved to be no exception to the norm.

The gathering began with a discussion of a recent controversy among the poetic community. A suggestion has been brought to the groups attention that a portion of it’s title (A Spoken Word Symposium) could be a misleading misnomer. The suggestion stems from the feeling that Spoken Word Poetry is a form of poetry with a specific form with its own unique elements and to include the phrase disappoint those who attend the gathering expecting it to be focused on this poetic form.

Although there was agreement all forms of poetry are technically “Spoken Word” creations, it was pointed out there are many who associate “Spoken Word” poetry with those presented during Poetry Jams and other similar events. This was not mentioned during the discussion, but (if I could be permitted to offer my reflection on the issue) perhaps a change in the group’s title would be in order as to be more accommodating to those who enjoy all forms of poetic expression. Just a thought.

Other topics of discussion included the nature of human interaction with speculation on how that would effect the individual psyche if there were no humans around. This led to an engaging conversation as issues of what it means to be human and how our innate ability to adapt and survive the situations we encounter would come into play. This and other equally engaging topics inspired those who attended the gathering to leave it with a sense of “hmmmmm.”

In addition to the discussions, there were some poetry recitations and song performances as well. Much of the work was original compositions with some written during the event. There were also few readings from the classic poets which gave the feeling they were in attendance as well.

Prior to the “Just Say It: A Spoken Word Symposium” event, The Forwardian Arts Society held their monthly Music Lovers’ Gathering. Unfortunately, no one attended the gathering which may be moved to another time and day in order to be more accommodating to the schedules of those who would like to attend. If you have any suggestions in this regards, please feel free to share them with me.

In the meantime, the next Music Lovers’ Gathering will take place Thursday October 14th preceding that week’s “Just Say It: A Spoken Word Symposium” event. The Forwardian Arts Society is a fellowship for people who love the arts seeking to enhance the creative community by encouraging those interested in the arts to go forward toward their dreams, by supporting those groups and individuals who are manifesting their dreams through performances and/or presentations, and by loving them and all they do.

Beside our Music Lovers’ Gathering, other future gatherings of The Forwardian Arts Society will take place at The Cheeky Monkey Coffeehouse include a Literary Lovers’ Gathering on Thursday September 23rd at 6pm, a Film Lovers’ Gathering featuring the film “Zardoz” (1974) with Sean Connery on Friday October 1st at 7pm, an Artists’ Reception for The Cover to Cover Exhibition on Saturday October 2nd beginning at 6pm, a Visual Arts Lovers Gathering on Sunday October 3rd at 3pm. Please Explore The Forwardian Arts Society Website at www.theforwardianartssociety.com or call 570-269-3348 for more information about the fellowship and all it has to offer.
Posted by Unknown at 11:38 AM

good points and the details are more precise than somewhere else, thanks.