Jazz Standards at the PCOM 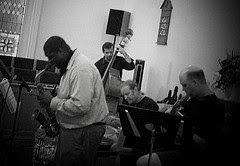 The Presbyterian Church of the Mountain in Delaware Water Gap, PA present The Kenny Jones Quartet on Sunday August 15th as part of their Summer Gazebo Concert Series. However, due to the rainy weather conditions, the concert was held within the Church’s Sanctuary which made it an even more intimate experience. The combination of the music, the building’s acoustics, the culinary treats, and the cool breeze generated around the rooms by the plentiful fans made it a very delightful place to be on a rainy night.

The Kenny Jones Quartet met during an Jazz Jam hosted by Jesse Green at The Big A Grillehouse in Marshall's Creek, PA. The Group consists of Kenny Jones on Alto Sax, Bob Victory on Guitar, Bjarni Nermoe on Upright Bass, and Skip Detrick on Drums. The music was an entertaining mix of jazz standards including those written by such greats as Thelonious Monk and Herbie Hancock. Yet, the quartet of musicians played the pieces as if they were written by them. You’ll find more Photographs in The Forwardian Arts Society PCOM Gazebo Concerts 2010 Gallery at www.myspace.com/forwardian_arts.

The Presbyterian Church of the Mountain (PMOC) holds their weekly concert at their Gazebo every Sunday from 6pm until 7:30pm running until the end of August. They are free and open to the public with concessions available for purchase. When it rains (or if rain is expected), the concert moves inside the church itself. Their next installment of their Gazebo Concert Series will be The Dixie Gents on Sunday August 22nd. Please Explore The Presbyterian Church of the Mountain Website at www.churchofthemountain.org or call 570-476-0345 for more information.
Posted by Unknown at 2:47 PM