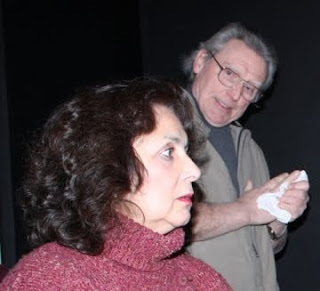 The Shawnee Playhouse in Shawnee on the Delaware, PA is currently their presenting their production of “Moments” featuring a collection of 10 minute plays written and directed by Rob Howell which were chosen as the winners of The Annual Shawnee Original Playwrights Contest. The evening consisted of 10 plays of varying themes and qualities. Some were better than others but the entirety of the program was enjoyable as it gave the audience an opportunity to see some new unpublished work.

The first of the plays presented was entitled, “To Tongue or Not to Tongue” which was an amusing piece centering around two actors who are directed to engage in a passionate kiss (with tongues) in spite of not knowing each other. The second play was entitled, “Lifting the Seat” which proved to be one of the best in the collection. It was very amusing as it allowed a common complaint among couples who are living together to reveal other problems in the relationship. The third, sixth, and ninth plays were presented as a trilogy and were individually entitled, “The Encounter,” “A Closer Encounter,” and “Ad Infinitum.” This set of plays proved to be the best among the collection as they were filled with some very funny dialogue which was delivered superbly by those cast in the principle characters’ roles.

The fourth play was entitled, “Easy to Love” and was an interesting exploration into the main character’s propensity fall in love instantly and completely with every woman he meets. It was acted well enough and the premise was amusing but there seemed to be something missing from the piece. The relationship between the main character and the woman he shared a conversation about his predicament didn’t quite work for this reviewer and that kept the play from being as enjoyable as most of the others being presented. The following play entitled, “The Price of Serenity” didn’t fare much better which consisted of a conversation between two people and contained a twist ending. However, the characters seemed very one dimensional which made it a bit dull for this reviewer.

The remaining plays were entitled, “Some Guys Never Learn” done in two scenes relating to a character owing money to the mob, “Home on the Grange” about three farmers talking about how to improve their farming and marketing skills, and “Meditating Bob” about a couples’ differencing approach to the death of a neighbor and other marital problems. These plays were nice to watch but they did little to enhance the evening’s theatrical experience.

As mentioned earlier, some of the plays were better than others which could be attributed by the unevenness of the acting. Some actors were excellent as they gave life to their roles while others seemed to be merely reciting lines and gave very little to their roles. Many actors have found the script they’re given needs to be modified as a number of writers tend to be too structured in their writing. They write in complete sentences not realizing people don’t often speak in complete sentences while they’re holding a conversation or encountering an unexpected occurrence. It then becomes necessary for actors and directors to go “Off Book” in order to present the play with a suspension of disbelief.

The plays presented in “Moments” that really worked for this reviewer felt conversational while those that didn’t quite work felt “written.” However, it seems the plays in this collection were written over a period of time with some being created quite a while ago. The Playwright/Director’s made mentioned of how some of the pieces may evolve in the future. This demonstrates how the writing process is a never-ending one allowing the work to grow as the playwright along with his/her skill grow. This give this reviewer much cause to anticipate future endeavors by this author of both original scripts and re working of those presented during this current production.

This production of “Moments” continues its run at The Shawnee Playhouse in Shawnee on the Delaware, PA until January 17th. Although the production has it’s downsides, it’s still worth attending as the enjoyable pieces are very funny and not to be missed. Perhaps this serves “Moments” well as a metaphor since the moments of our lives are often a mixture of what is and what isn’t enjoyable thus making it all the worth while living.

The next Shawnee Playhouse presentations will include “The Housekeeper” January 23rd - 31st, “The Three Tenors” on Friday January 29th, “Love in a Time of War” February 6th - 14th, “Lover, Winners, and Losers” on Sunday February 14th, “The Seafarer” February 19th - March 21st, and some Staged Reading February 26th - 28th. Those who enjoy the Passionate Art Lover level of membership in The Forwardian Arts Society are offered a $2.00 discount off the admission fee of The Shawnee Playhouse Productions (excluding Children Theatrical Productions and those presented by non Shawnee Production Companies). Please contact The Shawnee Playhouse at 570-421-5093 for more information and to reserve your ticket.

Photograph provided by The Shawnee Playhouse depicting Lillian Ramirez Gonzales and Scotty MacIntosh who appeared in Rob Howell’s “Lifting the Seat.”
Posted by Unknown at 3:07 PM