An Evening with Bob Dorough 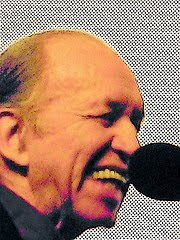 The Pocono Community Theater (PCT) in East Stroudsburg, PA presented “An Evening with Bob Dorough” on Friday January 8th. After an introduction by PCT President of the Board of Directors Skip Scheetz, the capacity crowd who gathered to hear the Jazz Great were treated to a selection of songs made famous by a variety of films all sung in the incomparable style Bob Dorough has become well known for.

The concert continued with songs from his best known work done for the “Schoolhouse Rock“ series which appeared the ABC Television Network during the 1970s and 80s during their Saturday morning programming. The remainder of the program consisted of other songs from his Jazz repertoire with many either being composed Bob Dorough or co written along side many legendary lyricists. The evening concluded with the entire audience joining Bob in the singing of some familiar tunes followed by a reception filled with wonderful culinary treats provided by The Pocono Community Theater.

The concert served as a special thank you for those members who chose to renew their membership early to enhance the theater’s financial stability. It also served to raise funds (which included a 50/50 raffle delightfully solicited by Emily Jane Duda) to enhance The Pocono Community Theater’s work in not only bringing the best of Independent and Foreign films not commonly seen in larger movie venues, but other meaningful experiences including art exhibitions, lectures, festivals, and literary readings. The Pocono Community Theater strives to be what it name indicates; a theater for the community serving its desire to enhance its life through the arts.

There will be another “Evening with Bob Dorough” concert scheduled for Friday January 22nd at 8pm for those who were unable to attend the one on the 8th. Reservations are require to attend as seating is limited by the size of the theater. Please feel free to contact The Pocono Community Theater at 570-421-3456 for more information and to reserve your seat. You’ll find more photographs of the January 8th “Evening with Bob Dorough” in The Forwardian Arts Society Pocono Community Theater 2010 Gallery at www.mysapce.com/forwardian_arts.

In the meantime, the next event to be held at The Pocono Community Theater will be Thursday January 14th beginning at 7pm of a Youth in Fusion Event in collaboration with East Stroudsburg (PA) High School - South featuring a collection of Documentaries made by 10th graders in conjunction with the Alcoholism and Pollution for Community Awareness organization. The event will include Spoken Word performances by Urban Mountain Voices and Youth Poetry Slammers along with live music provided by students of East Stroudsburg High School- South. Please Contact Youth in Fusion at 570-839-2330 for more information.

The Pocono Community Theater continues service to film lovers throughout the area with their showing of the films “Precious,” “Up in the Air” and “It's Complicated.” The film “It’s Complicated” was the film recently seen and discussed during The Forwardian Arts Society Monthly Film and Chat Gathering for January. You’ll find our review of the film posted on our profile. Please feel free to contact The Pocono Community Theater at 570-421-3456 for more information on their film showing times and other offering they have.

Websites of those mentioned in this article are The Pocono Community Theater at www.poconocommunitytheater.org, Bob Dorough at www.bobdorough.com, Urban Mountain Voices at www.urbanmountainvoices.org, and Youth in Fusion at www.youthinfusion.org.
Posted by Unknown at 2:06 PM