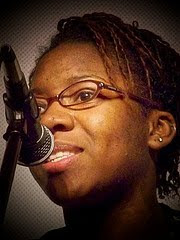 The Pocono Community Theater in East Stroudsburg, PA hosted The Youth Infusion, Inc. evening of documentary films and slam poetry on Thursday January 14th. The two documentary films created by students of East Stroudsburg High School (ESHS) - South exploring the safe, uncontroversial topics of pollution and alcoholism and were titled, “We are the Solution to Pollution” and “Before You Drink.” Each film was accompanied by a voice performance by Urban Mountain Voices which is a group of poets consisting of student of both the East Stroudsburg, PA Area and Pleasant Valley School Districts as mentored by Tricia McGarvin-Fernandez.

The evening began with a performance by musicians Michael Colao, Andrew Norman, and Tom Ostrow who are also ESHS students whose formation is so new that not only do they not have a name for their band, but they just had their first rehearsal a few days prior to the event. Nether the less, their performance of some popular cover tunes made a pleasant sound complimenting the event. A member of the trio mentioned they have recently written some original pieces and they hope to present them at a future date.

The evening continued with the introduction of the students who help create the film, “We are the Solution to Pollution” made by Francesca Turturro who is the Executive Director of Youth Infusion, Inc. They were Udochi Onwuka, Tito Rodriguez, Mariette Martinez, Alexis Marrone, and Hasana Parham. This was followed by a voice performance on pollution by Urban Mountain Voices who consisted of Poets Carl Watts, Elcy-B, Ray, Malcum D. Tinglin, Blake Quin, K. J. Wilson, Ryan Bernard, Nessa, Joeseph “The Kid” Melara, Blair “The Truth” Thomas, and Kerry Sprouse. This was then followed by a screening of the film itself.

After an intermission, Patricia Tiernan was introduced who serves the ESHS - South as an English teacher and directed the documentary films providing oversight and guidance over the projects. This was followed by an introduction of those students who helped created the film, “Before You Drink.” They were Tiara Raman, Tiffany Alvarez, Jake Wombacker, Tim Clarke, and Andrew Reeves. A team slam presented by Urban Mountain Voices followed prior to the screening of the film. The evening ended with to giving away of some raffle items and numerous recognitions to all who have made the event possible.

The films “We are the Solution to Pollution” and “Before You Drink” were made as part of a project designed to give the 10th grade students of ESHS - South an opportunity to learn something about the art of filmmaking while giving voice to their concerns regarding some social issues. The project was done as a collaborative endeavor between the school district and Youth Infusion, Inc. whose mission is to engage “young men and women of Northeast Pennsylvania in the process of improving communities by providing them with skills, knowledge, resources and opportunities that will foster youth voice/action and empower them to improve their lives and the lives of others.” It was through this collaboration these students got a chance to participate in the filmmaking process and it is hoped their experiences will plant a seed so many of them will pursue it as a career and make some truly meaningful films. You’ll find more information about Youth Infusion, Inc. and all they have to offer by calling 570-839-2330.

The films themselves were quite well done especially if one considers some of the filmmakers never picked up a camera prior to learning of the project. They were by no means up to the standard of Michael Moore, but they well exceeded the expectations one may have from a group of dedicated fifteen year olds deserving of great praise and encouragement for their worthy endeavors. In fact, the film “Before You Drink” may have imitated a new slogan to help curb driving while intoxicated. “If you’re going to drink and drive, drink Pepsi.”

However, there was an element present during the event that is often pervasive in school related activities. This was an element of faculty control over their students. This was first made evident during the introduction of the students participating in the filmmaking process. They were interviewed by one of their colleagues but all of their answers were read from a written statement. It made one wonder if their answers were written by the student reading it or someone else. This may be a bid paranoid, but when one considers the uncontroversial aspects of the films’ topics, one realizes how much the school system had in the real decision making process. After all, no one would disagree pollution and alcoholism are unwanted aspects of our society. But, if a student wanted to make a film against the War in Iraq, would he or she be able to do so?

In contrast, The Urban Mountain Voices (UMV) performance provided more substance to the issues explored during the event. The group’s goal is to empower “young adults ages 13-19 years throughout Monroe County to develop critical inquiry skills while achieving a high level of literacy necessary to becoming effective leaders in the community. UMV achieves this by providing FREE, safe and uncensored creative writing and performance workshops, adult and peer mentoring, public performance opportunities and the publication of works.” While many of their endeavors are done in cooperation with several school districts, they simply provide guidance and encouragement to their participants without the type of oversight a secondary educational institute would instill upon them. In other words, Urban Mountain Voices is not bound by the limitations of school boards or parent groups who feel they have the right to determine what are acceptable topics students can approach even if those topics directly effect their lives.

An example of this contrast can be seen in a scene from “Before You Drink” and a poem presented by one of The Urban Mountain Voices’ participants. The film interviewed someone who was raped by someone who was intoxicated. As the person identity was concealed, the person’s gender was unclear. The person said the result of the rape led him/her to be more aware of whom he/she will choose as friends. The person also said he/she wanted to tell his/her story so others can learn from it. However, there was no story about her experience beyond the statements just mentioned. On the other hand, a poet from Urban Mountain Voices presented a poem about her experiences with alcoholic parents that was so powerful she had to stop in the middle of it to compose herself before she could continue. This gave a reality and depth to the condition which made it personal for each person who heard her words. You’ll find more information about Urban Mountain Voices and all they have to offer by calling 610-587-3725.

The next event to be held at The Pocono Community Theater in East Stroudsburg, PA will hold an Opening Reception on Saturday January 16th beginning at 1pm featuring the recent paintings of impressionist Carlo Savo. The exhibition will continue until February 27th. In the meantime, the theater continues to show the very best of Independent and Foreign Films not commonly shown in larger venues. These include the present screenings of “A Single Man,” “Up in the Air” and “It's Complicated.” The film “It’s Complicated” was the film recently seen and discussed during The Forwardian Arts Society Monthly Film and Chat Gathering for January. You’ll find our review of the film posted on our profile. Please feel free to contact The Pocono Community Theater at 570-421-3456 for more information on their film showing times and other offerings they have. You’ll find more photographs at The Forwardian Arts Society Pocono Community Theater 2010 Gallery at www.myspace.com/forwardian_arts.

Websites of those mentioned in this article are The Pocono Community Theater at www.poconocommunitytheater.org, Youth Infusion at www.youthinfusion.org, Urban Mountain Voices at www.urbanmountainvoices.org, and Carlo Savo www.carlosavo.com.

Please Note: “Spitin’” is a term used by Slam poets referring to the recitation of their work.
Posted by Unknown at 2:24 PM