You Reap What You Art 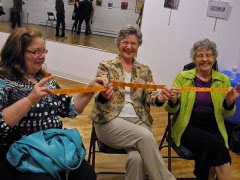 In their continuing endeavor to bring the creativity found throughout the North Eastern PA area to fruit, The School of Visual and Performing Arts (SVPA) in Stroudsburg, PA held a reception showcasing the work of local artists in their current exhibition titled, “Beyond the Harvest” on Saturday October 18th. The slight chill in the air reflecting the season was warmed by the hospitable atmosphere that greeted those who entered the school’s gallery and the glow found in the conversations that ensued brought a further coziness to the intercourse that was shared. In addition to the art that was on display, the evening provided a variety of entertainment as presented by The Diane Verdi Ballet Class and Guitarist Renard Cohen of Son of Blues www.facebook.com/pages/Son-of-the-Blues/412836085403255 along with delicious culinary fare provided by Flying Merswine Catering www.facebook.com/pages/Flying-Merswine/368792593272368?ref=br_tf and wine that was donated to the event by Burnt Toad Studios www.facebook.com/burnttoadstudios.

A majority of the pieces presented in the exhibition captured the flavor of the modern conceptions of the Halloween Season which encouraged the imagination of each viewer to flow into the macabre scenes the work depicted until the experience of delving into its horror sent a delightful chill down one’s eagerly awaiting spine. Yet, there were a number of works which embraced the colorful hues of the season that allowed the spirit of the viewer to blossom so its divine and ripened attributes could be gathered and feasted upon whenever one hungers for its sustaining essence. The combination of these and other approaches to the exhibition’s theme deftly implied a sense of an encapsulating unity between the natural and the supernatural worlds leading many to transcend the sepia landscapes of their ordinary existence and to view life more intuitively.

As the delightful din of conversations reflecting the artistic qualities of the display echoed around the school, attention was given to the gallery’s curator, Jody Singer, who shared his welcoming remarks with the gathering along with news of future endeavor the establishment and other art related entities were soon embarking upon. One of these endeavors were the school’s Marker’s Market which will be held on November 8th and 9th featuring a weekend filled with artisanal goods, crafts, art, and more. There was also the introduction of a new store that recently opened on the town’s main street called, “Puff’s Magic Shoppe” www.facebook.com/puffsmagicshoppe which is a “retail/hippie/head shop” offering a variety of pipes, hookahs, clothing, tapestries, groovey gifts, novelty items, and more to all who venture into their cheerful domain.

It was soon after Mr. Singer concluded his remarks did Ms. Diane Verdi take the stage to introduce the students from her Ballet Class. In a preview of the class’s participation in The Northeast Ballet Ensemble www.facebook.com/NortheastBalletEnsemble production of “The Nutcracker,” the dancers floated across the floor with each step touching upon the imagination of each viewer encouraging the childlike spirit within to join in the joyous movement. Ms. Verdi shared with the audience the history of ballet as the dancers retreated after each segment they performed in order to prepare themselves for the next.

In these historical tellings, Ms. Verdi revealed ballet began as a male dominated performance with women placed upon the stage as a primarily decorative function. Later, women became a more pronounced presence in ballets and chose to rid themselves of the restrictive garments and undergarments indicative of the time in order to move about more gracefully. This led to the hemline of skirts to move above the ankle which attracted many men to the performances. As the inches of the ballerinas’ hemlines moved higher in their numbers, so did the attendance numbers among the artistic form’s male patrons. However, the modern day audience, according to Ms. Verdi, has fewer men attending which is an unfortunate reality. So, the men who were present during the reception were called upon to bravely go against the trend and partake of the beauty found in the artistic form of ballet.

A full performance of #“The Nutcracker” by Pyotr Ilyich Tchaikovsky will be presented at The Notre Dame High School in East Stroudsburg, PA December 6th and 7th as performed by The Northeast Ballet Ensemble. In addition to preparing for #“The Nutcracker” performance, Ms. Verdi shares her extensive knowledge of the art form of dance through the classes she conducts at the school. You can learn more information about them, how to reserve your place by registering for them, and learn how to obtain tickets to attend the performance of “The Nutcracker” by calling 570-619-4113 or by emailing her at D1108@ptd.net.

It was as the delights embodied in the segmental performances of the work danced inside the heads of the denizens of the gallery did Renard Cohen and his guitar began to prepare for their performance. The music that flowed from Mr. Cohen and his instrument enhanced the mood of the room and all who inhabited it. The songs he played ranged from those that engaged the listener through their sweet and mellow tones to those whose raucous rhythms moved the body in synchronization to their gregarious beats. It was during his performance did the 9pm hour grew near indicating the time for the much awaited Art Raffle would soon be experienced.

Last minute purchases were made by those who vied for the winning tickets so they could obtain one of the many works of art that was donated for the occasion. Before the commencement of the proceedings was announced, Froilan Kali Ramirez shared news of his class titled, “An Introduction To Latin Rhythms” will soon begin at The School of Visual and Performing Arts and an invitation was extended to partake of the lessons that could be learned through the art. The conclusion of this sharing led to Mr. Singer officially announcing the beginning of the Art Raffle and the first of many items were introduced.

During their introductions, Ms. Ashley Fontones and Ms. Elizabeth Starship graciously held each item elegantly aloft and therefore enhanced the magnificence of the piece with their profound beauty. The tickets were read and the crescendo of excitement grew until the last digit revealed the winning ticket’s owner. A pang of disappointment filled the room until it was replaced by an enthusiastic congratulations to the person who obtained the coveted item. As the last of the items were presented to those who held the winning tickets, farewells were shared as the company of art lovers reluctantly made their way out of the gallery so they could take the memories of the evening home. You’ll find more photographs taken during the Artists’ Reception in The SVPA 2014 Gallery at www.facebook.com/media/set/?set=a.10152519973960421.1073741905.636000420&type=1.

The School of Visual and Performing Arts is located in Stroudsburg, PA and has been instrumental in the creative development of its students for over 20 years. The facility holds classes in dance, ballet, and movement led by Diane Verdi, Paula Heeschen, and Kathy Kroll as well as classes in the theater arts led by Jazmin Ospa and Shellie Bransford. The school also offers a number of workshops with each focusing on a variety of creative disciplines. You can learn more about The School of Visual and Performing Arts by exploring their Website at www.schoolofvisualandperformingarts.org or their Facebook Page at www.facebook.com/schoolofvisualandperformingarts.

The exhibition titled, “Beyond The Harvest” will be on display in The School of Visual and Performing Arts until December 15th. Although the attendance of the Artists’ Reception was more modest than usual, the energies shared through the viewing of the work, the performances that were enjoyed, and the conversation the event inspired made attending the gallery for the evening much more than a worthwhile endeavor. Their next exhibit is titled, “Winter’s Wishes” with an Artists’ Reception scheduled for Saturday December 20th beginning at 6pm. The date upon which the exhibit will continue to be on display is yet to be announced. All area artists are welcomed to participate by placing their work related to the theme in the exhibit. The drop off dates are December 18th and 19th. Please contact Jody Singer at mountainsidearts@hotmail.com for more information.
Posted by Unknown at 7:11 PM